Maybe there is a issue with how the positions are extracted or calculated?

I have no idea as I can’t test, probably because MFP sends way more commands while scriptplayer only sends on script actions. But MFP should work with update rate set at 5hz tho.

Hey I made a scene for VAM that is perfectly setup for BusDriver to sync the movements of the model to the movements from a funscript playing on MFP. Here is the setting file on my Patreon

Here is the scene on the VAM hub.
Here is a clip showing how it works in VAM.

Here’s still of it working. 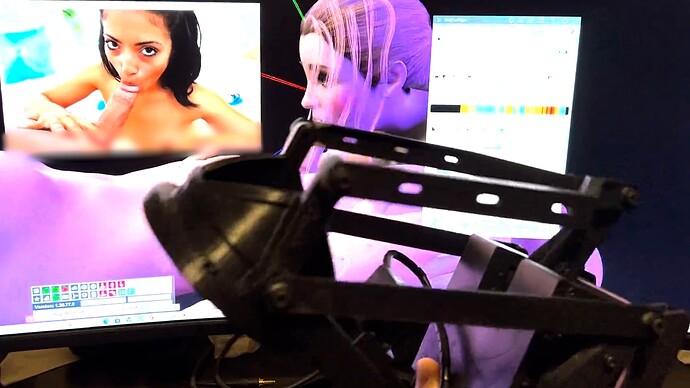 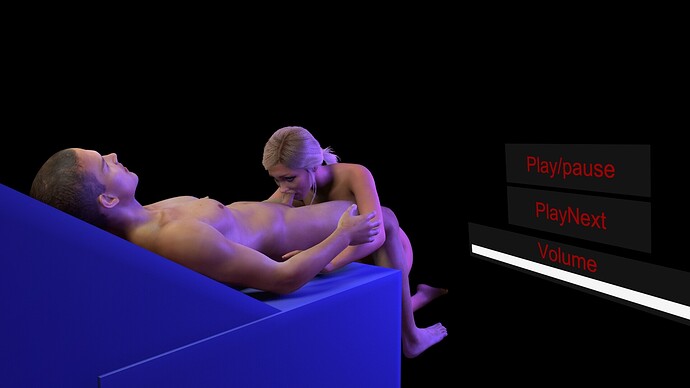 I should probably publish BusDriver on VaM hub so it can be used in scenes easier.

Im assuming you are using wifi for SR6? You can see that VaM motion is perfectly in sync to the video while SR6 is like 25-50ms behind.

Yes I’m using WiFi for the SR6. I had all sorts of trouble getting the serial port to work. It just makes the SR6 lurch and jump if I have too many axis going. I gave up troubleshooting it. UDP is fine and when I’m in VAM, I can’t see the video anyway so I don’t care how in or out of sync it is.

I had all sorts of trouble getting the serial port to work. It just makes the SR6 lurch and jump if I have too many axis going.

Yea, a known issue with esp, you could try using latest firmware which I think allows you to change serial baud rate, and then use 921600 baudrate in firmware and in MFP.

i think the stuttering comes from the interpolation. I’ve run a script and compared the file output with the original script. The interpolation inserts new points and positions based on it’s function. If the frequency is very high, more estimates are being inserted in the script - leading to positions such as 53.4321123 at time 52345. Paired with a bluetooth (buttplug) connection, every point is sent to the Handy. This explains why the stuttering is worst at the highest frequency and “better” with the lowest. Would it be possible to add a button to deactivate the interpolation feature? Maybe its already there and i haven’t found it.

The issue is not the interpolation itself, since it is smooth, but the amount of data bluetooth can send.
If it stutters even at 5-10hz then it will also stutter during scripts because they frequently have moves below 200ms.
MFP was made with OSR in mind so devices that use bluetooth are not really able to keep up.
Sending only script actions without sampling will have to ignore 99% of features in MFP.
If the device can only support such low frequency commands then I dont know if I want to support that, it means it also wont work with random strokers or vam plugins, basically anything that isnt a predetermined script.

Would it be possible to add a button to deactivate the interpolation feature? Maybe its already there and i haven’t found it.

Currently no, I have this issue on github tho: Implement sending data only on script actions (look ahead) · Issue #92 · Yoooi0/MultiFunPlayer · GitHub

Really wish there was a thorough guide for this, it seems so good but I simply cant get it to work

Really wish there was a thorough guide for this

Yea, I guess its about time I do that.
Will probably start writing one soon.

I simply cant get it to work

What are you having trouble with?

Yea that was one of the first issues I added:

I closed it some time ago due to only one user requesting it.
Reopened now, will see what can be done.

Added, try this build: nightly.link | Repository Yoooi0/MultiFunPlayer | Run #3990172438
There is a toggle in settings that allows you to enable manual window resize.

Works as it should, thanks!

Any plans to add linux support ?

So I was wondering, and actually tried it out, but it didnt work quite the way I had hoped.

What I tried was this: I tried adding multiple handies in different locations to maybe do cock heros or other scripted videos together. I know the app isnt meant to do this. but I figured why not give it a shot.

It did work, well kind-off, me as the host had the script working just fine but the other people that I had connected through the handy connection keys had choppy movement, probably this is PING related, since we were all connecting our handy through wifi and some off them were in the USA while I am in Europe, so I figure its related to latency.

Maybe this would be a fun feature to add and somehow add a setting to balance everything out? Or maybe there already is something that will be able to do this?

I know this might not be the most useful and easily comprehendable comment. its really late here and im super tired. my brain is not working great at the moment. but hopefully you understand my intentions.

Any plans to add linux support ?

I would like to add support for linux and mac but that requires rewrite in new UI library.
I might do it someday depending on how much work that will be.

It did work, well kind-off, me as the host had the script working just fine but the other people that I had connected through the handy connection keys had choppy movement, probably this is PING related, since we were all connecting our handy through wifi and some off them were in the USA while I am in Europe, so I figure its related to latency.

The Handy support was added as experimental because their api does not behave well with the way MFP works. The Handy only works well when it is playing low quality scripts. I’m surprised that you as the host had smooth movement, I dont think I ever heard of The Handy working well with MFP

So yea, your idea is sound, and that why I added support for multiple outputs at the same time. But The Handy just doesnt work well with MFP using their api currently because each command goes thru their servers. Ping shouldn’t be an issue, the movement would just be delayed by the ping, the issue is ping jitter where commands sometimes take 100ms and sometimes 1000ms to arrive.

alright, that’s good to know, is there any way to fix this behaviour or improve it? maybe work together with the people that make the handy?

To improve it they would have to add a way to send commands locally via wifi without using their servers.
From what I’ve gathered on their discord its not happening.