I created a patreon for monthly free scripts

I decided to create a patreon which can be found here my plan with this patreon is to allow people to choose the videos they want scripted up to a certain length (some exclusions as i only do straight scripts) based on the tier they choose. along with this system of choose the tier, choose the video, get the script. the commissioner can also choose whether or not they want the script to be publicly posted for the world to enjoy or just privately messaged to them.

Here’s a preview of how the tier system will work (prices are not set it stone and are subject to change) let me know what you all think about this proposal. 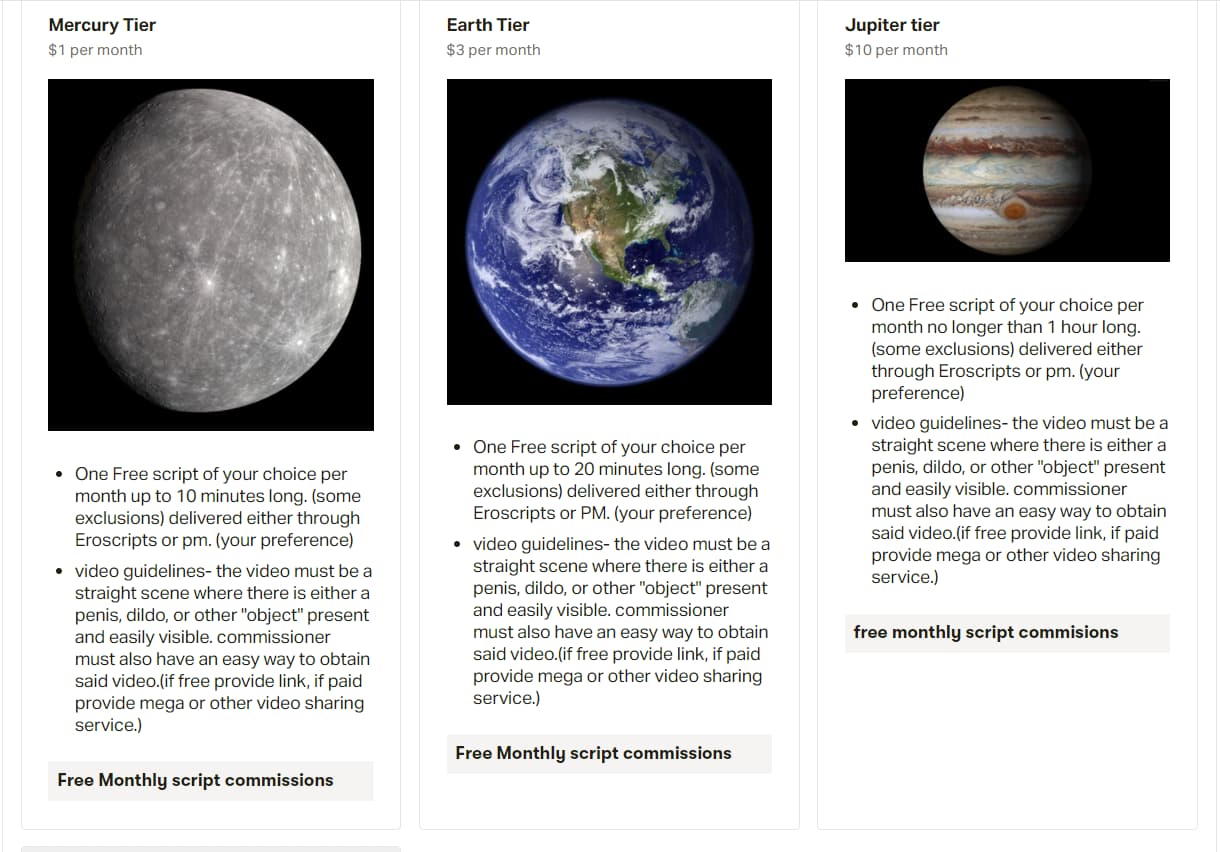 Also as a side note for those wondering i will still be making free scripts aswell when i have time I’m currently working on my first vr script
https://vrcosplayx.com/members/cosplaypornvideo/rick_and_morty_a_xxx_parody-324915/ 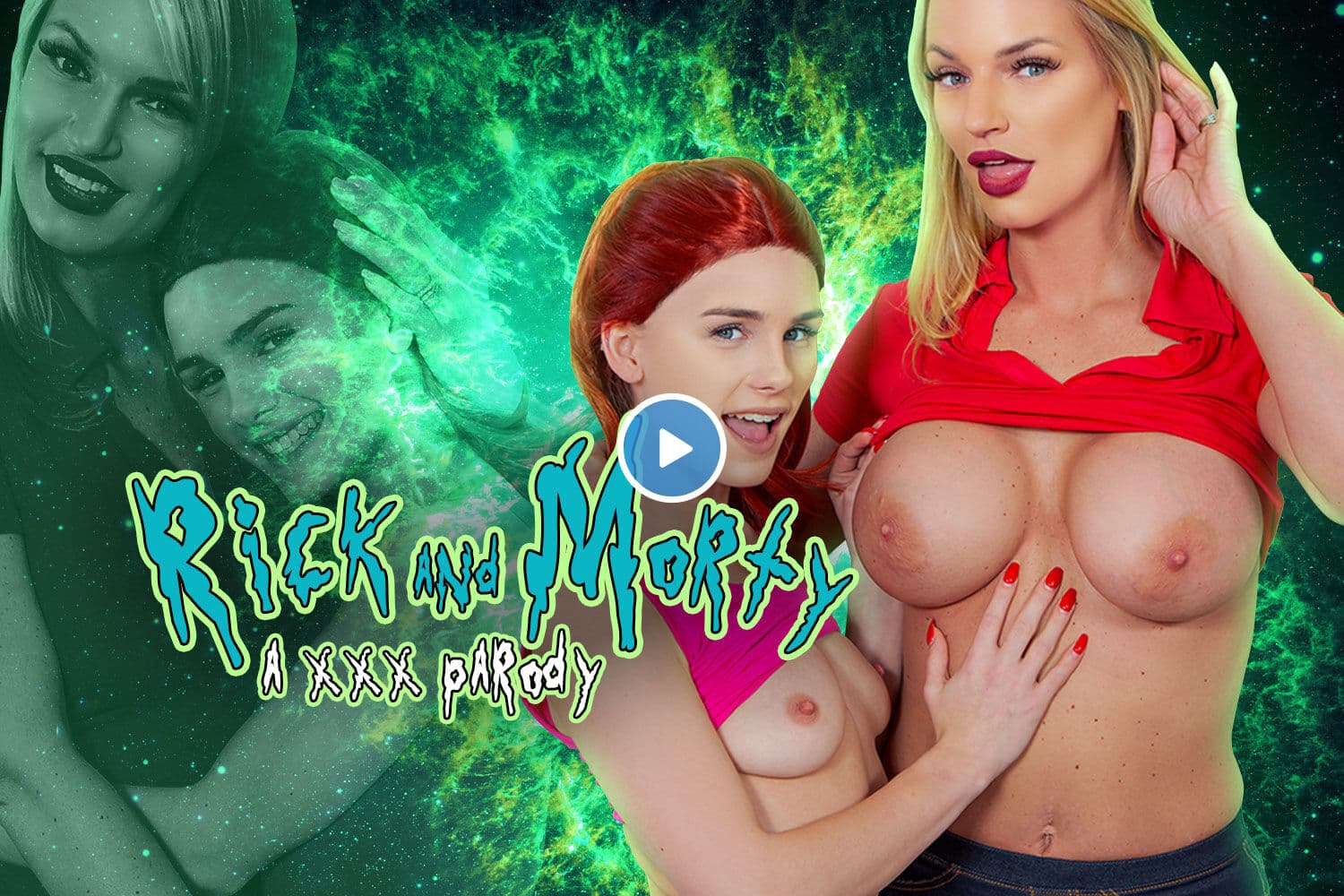 It’s an interesting approach to the whole issue. I hope it works out. Though given the shenanigans at Patreon, I’d suggest going with SubscribeStar instead (or as well).

I’d just advise that you link to some of your existing scripts here so people can see the quality of your work.

Great idea! I like, that every tier can suggest videos for you to script. This should lead to more people willing to subscribe.

Some feedback:
I’d suggest tier 3 for 5$. I doubt people will pay 10$ to be honest. If I would want to buy a script, 5$ is the absolute maximum I’d pay. And then the video has to be long enough and a video, that really really like.

I’d also suggest, that every video you script for the tiers should be public. These videos should also be only available for the assigned tier. So Mercury tier wouldn’t get Jupiter scripts. But Jupiter tier would have access to all the scripts. After a while, you will get a good collection of scripts available for the users. There is a good chance, people will just subscribe, to get the scripts. The more content you can present and is available = the more likely it is people will subscribe. If you hide the content, people may not subscribe, because there is no content for them.

Did you think about making scripts just for patreon? Again, the more content you can give out, the more likely it is people will subscribe to you. Maybe one exclusive patreon script per month (maybe even per tier).

Funny idea with the star tiers

You are very active here, released a lots of scripts. It is total understandable for me that you go this way. Like I said in this post, this community is not always a giver.

But I am totally honest with you, I don’t know if I will support you at first. You scripts seems to be very good. I didn’t tryed a lot of them because you didn’t always hit my taste. But that’s totally okay, maybe your VR scripts are more my taste and I become one of your patreon.

Maybe you think about some kind of underground exchange program. We could discuss this in a PM if you want.

I wish you the best!

P.S.: Please post infos of your patreon only scripts still here, should be located in the paid area I think.

I do like this idea. once i get more familiar with patreon ill 100% do something like this

totally ok not everybody has the same tastes, that’s y I figured people could sort of choose their own videos and how they’d like them scripted. giving the viewers more choice.

From my site, I couldn’t script a video I doesn’t like a lot. How will you manage that or aren’t you so limited in what you do like?

Also: Go advertise yourself ^^ Post it on the Handy reddit, and on their official discord as well.

I made a creator Portfolio a while ago and have been trying to add to it when ever i make a new script.

Ahh, perfect. Couldn’t find it somehow, when I was looking for it ^^

Sorry I only collected IRL scripts.

@spaceguy4820 I am not sure about one thing at your patreon description:

One Free script of your choice per month up to 10 minutes long.

each person that joins gets to choose any video they want scripted up to the length the tier allows. each month ill take requests and script them in the order they come. higher tiers get priority ofc

also i decided to create 3 separate posts on the patreon for each tier. mercury, Earth, and Jupiter each once being locked to their specific tier where i will post the scripts the commissioners want to be public. ofc the higher tiers have access to the lower tiers posts.

I messaged you through patreon not sure if you got it. but thanks again for joining.

Do you think you can handle this much upcoming requests?

For example if you get 100 patreons, everyone submit only 1 request per month, you get 100 requests per month. You never be able to handle that and everyone that are not on the top of the todo list is maybe pissed because he/she has to wait too long.

Wouldn’t it be better to use a poll system for tier 1? You put the requests from a month into a poll and only scripts the first 5 or something.

if I get more requests than i can handle this may be a good solution to the problem. maybe higher tiers can also vote on the polls with higher voting power? thanks for the suggestion. as of now I’m just testing the waters to see if this is something that could be a reasonable and worthwhile source of income. as i already enjoy scripting but the hardest thing for me is deciding what to script.

I think this is a great idea and the prices are reasonable considering you are effectively taking commissions.