Any thoughts about making scripts for female sex toys like Lovense Nora? In coming months there will be greatly advanced device coming from major interactive sex toys manufacturer.

We would be happy to make it work with SexLikeReal. I can also think of using a sex toy by male and female respectfully at the same time while watching the same video in SLR app.

Not yet, but we can try to get it supported

The Kinky Shibby site has numerous files with funscripts that they recommend to be used with the Lovesense vibrators. They link to the ones supported and they have vibrators for both men and women that are compatible. Here is an example.

Relax into the raindrops as my voice rambles your mind down into that sweet, suggestible place. Washing away stress, washing away thought... But it'...

You should not have much to do if this is correct! 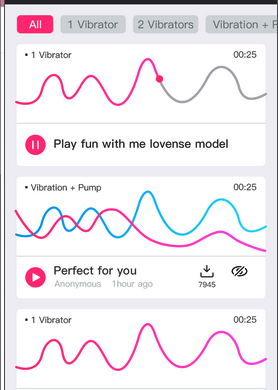 I hope my question isn’t out of topic…

But i wanna find some female scripts / female-pov-script to play with my gf plugin her toy on handy. (Thanks i know about issues, we’ll be carreful)

In other world , searching for script who is abble to transforme Handy to a female fuck machine.

So can il be possible with the buttplug connexion? Is an fuckmachine script already available ?

Is it only audio based?

I would definitely be interested in doing some scripting like that for more advanced toys, but there’d need to be demand. With the way the SLR store is now do you have much of a female customer base? seems like it would need to be a from the ground up development at this point with a big push for marketing it to women, and with a focus on producing more content that appeals specifically to women. Only so many women will enjoy watching a vr video of a male perspective with a woman, even if they’re attracted to women. That’s why i think the vrintimacy scenes work well, there’s no “guy”, it can be from anyone’s perspective. or at least anyone who is attracted to women.

I think what is needed is devices that people can use to control these toys. So they can script on the fly with the device, and so making a custom video for someone that comes with a funscript would be much more practical. Same for vr streamers, having a live stream with a live funscript.

But i wanna find some female scripts / female-pov-script to play with my gf plugin her toy on handy. (Thanks i know about issues, we’ll be carreful)

In other world , searching for script who is abble to transforme Handy to a female fuck machine.

So can il be possible with the buttplug connexion? Is an fuckmachine script already available

When we started male Interactives there were some few vocal people. Now it becomes like a mainstream. I have expectations female sex toys would work. Right now we expect we should be able to convert existing scripts to make it work with female interactive toys, not 100% sure it would be the best option. We are getting there. Adding Nora integration seems to be the first major step in that direction.

talking to me or french master? you replied to me but quoted them

either way. easiest way to talk to me is on discord.

My bad. Checking with you on female scripts