Saw a post a couple days ago where a guys was talking about a new version of the Launch.

And today I received a E-Mail from Kiiroo 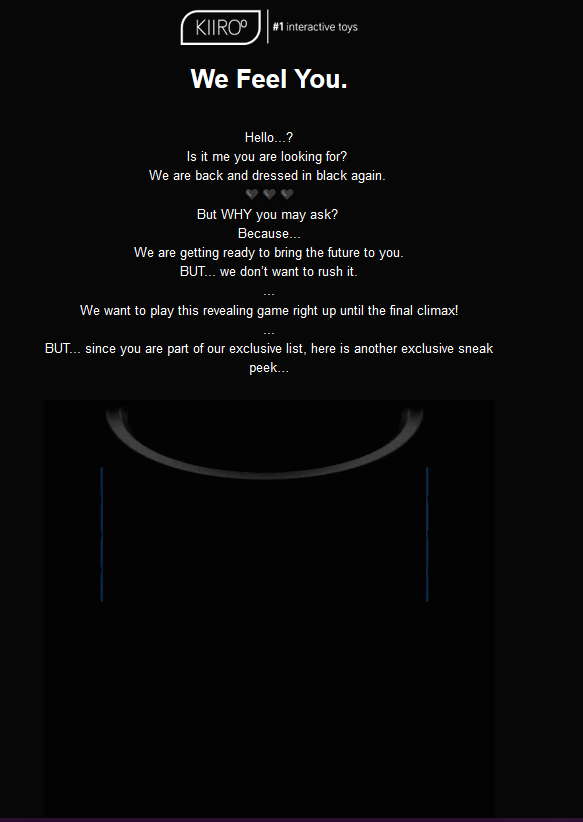 The guy on reddit actually talks about the device not beeing ineractive, would be a bummer.

Damn, no interactive would be a huge missed opportunity. Thought they’d learn from the Quickshot Launch.

I really dont think it will lack interactive (at least I hope not) because they have been seeing success of interactive and they have built alot of framework around it and the Quickshot launch already exists without interactive, so I am optimistic - fingers crossed for sure though still

I 100% would not buy it without interactive, would be nice to see a device that works with all fleshlight models (literally just include adapters for different case sizes).

It actually makes no sense to me since the Launch is known for the interactive mode. And now that there is the handy
as a competitor too now, I dont know who actually will buy that thing if its not like half the price or less than the handy.
There is actually a lot of room to improve from the first launch but without interactive mode it would be the worst move the can do.

would be nice to see a device that works with all fleshlight models (literally just include adapters for different case sizes).

I wonder how they gonna handle that, since they´re not contracted with Fleshlight anymore AFAIK.

lol if its not interactive i cant see it being very popular, would be a terrible decision, i assume this will be coming mid 2021 given they are opting for a slow build up, probs wont get revealed until early 2021

Honestly, there is little that this will offer that the OSR2 doesn’t already do, and can do. Maybe fleshlight will produce a 3d printer that lets you print different vaginas from home. That would be something.

Getting it next week should be good.

Looks to be this The Keon Collection | KIIROO | Kiiroo

It doesnt look much smaller…

It looks kinda like a Launch, the machine’s form factor, the fact that they used sleeves with cases, how they operate, it’s all like the Launch.

I expect it to be better than the Launch, but not as good as the Handy (probably going to have a max of 300 strokes per minute, with the stroke length being a bit less than the Handy due to the long and bulky sleeve). The price of it is $250 USD, while the sleeves are $70. I feel like this is kind of a knee-jerk reaction after the Handy stole their sales, trying to find improvements on the launch (but not trying to start from scratch) so they could have a product out.

I was about to order myself a handy last week, right when they came up with a teaser for this new toy.
So I thought I´m gonna wait a bit and see if this new toy actually got some new features that would change my decision
to not buy the handy and go for this one.
My first impressions where kinda meh, the keon is def. a improvement to the launch in lot of ways, like its smaller, it can stand by itself, no more touch buttons and a couple more minor improvements. It´s more like a facelift of the launch imo but doesnt change much, esp. since the stroke length and speed is almost the same slightly better for the keon but not worth to upgrade I guess.
I for myself got not impressed and I will end up buying the handy.

Here is a first preview video I found: yeah, im going to wait on this one until both my launches are broke beyond repair, then i’ll opt for this, i dont see the point in buying this if you already have a launch if its only a minor upgrade, looks nice though

Have read about max 240 strokes/min but found nothing about the stroke lenght.

that will answer some questions The Case it self is interesting, a fleshlight will fit in perfectly as the youtube vid shows… and the case is a bit smaller than the Fleshlight original case…

i think it would fit much better in the handy, so it would be a better way to use fleshlights with this case and the handy.

The speed an stroke lenght are the same as the launch i think, dont see any different… i even think that the launch is a little bit faster as i saw the video above.

Pretty sure that 240 strokes/min is at the lowest stroke length.

Based on that video, it looks notably slower than the Launch, which is a move in the wrong direction.

yeah and its a little bit strange that the tester in this video has the opinion that the keon is slightly faster than the launch, its obvious that its exactly the opposit. the video shows cleary that the launch as a bit faster, not much, but a little bit… especially at the long strokes the launch is faster, and that is a negative point for the keon that hurts… cause the long strokes are the ones that will often be in the final of an video in a very fast way… most of the time the launch cant handle them. if the keon is slower on these long strokes as the video shows, its definitely a step in the wrong direction.

if you watch the video you can see that there is no way for 240 strokes/min for the long ones… so i would say, the keon isnt any faster than the launch, rather a little bit slower i think, or just the same pace…

if this doesnt break as easy as the launch does it will be a big improvement , but the whole ‘slower’ thing has me a bit worried, are they thinking slower will make it break less?

@Ricster89 about the “slower” thing… just watch the video, you will see, yeah the launch is a little bit faster, but you have to watch exactly, so i dont think that its such a big difference (maybe 2 stroke per minute faster)… but its just the wrong direction of development. we wished it would gone faster than the launch, and doesnt break…

but i have to say anyway… my launch is about 2 years old, or even older, and works still like on the first day.

to be honest i dont have anything to complain about the launch, instead that i whish it would be faster and the control buttons need a better solution… (the on button and bluetooth button is way to sensitive, and the side buttons to control lenght and speed are nearly unusable in action. but i use it only with scriptplayer anyway, so i dont need them)

But i dont think that the keon is such a “revolution” in this points to pay 200€ or more for it… so as long as my launch work, i will use it… and if the handy will work better with the scriptplayer, and can handle fleshlights better (for example with the stroker case of the keon) i would rather buy the handy than the keon i think