Ive been using 35kg coreless servos
My main issue is the internal gears strip after ~20hr. Has anyone had this problem? Is there a solution or method to extend a servos lifespan?

Don’t let your servo’s overheat. Check if you have your limits set correctly. If it’s constantly slamming against your pelvis the motors will get overworked real fast. Make sure the servo horns are mounted securely and there is no noticeable slop. Make sure your OSR2 is mounted securely and is not shaking about; this also adds to motor wear. You could also try lubricating your servo’s with some hub grease or something (have yet to try this).

To be honest I think that a fleshlight + added resistance are a bit much for just two motors. One of my reasons for upgrading to the SR6 was the overheating/wear problem. The SR6 spreads the load over 6 motors working (largely) in unison, and it has 6 attachment points which greatly improves the stability of the load. My SR6 gets noticeably less hot and so far I have yet to notice any significant wear after a few months of use.

You could check other servo types/brand, but I’m sticking with the 35kg servo’s. I don’t want to spend 100 euro’s for a single servo, which sooner or later is going to wear out anyway no matter how well you take care of it.

I reformatted my whole OSR2 to help with mitigating heat.

Then attached some heat Syncs to them.

Heat Syncs can also be added through the typical OSR2 setup and a fan can be installed such as:

This isn’t my rig, but you can see you can cut out part of the cover to throw in heat syncs: 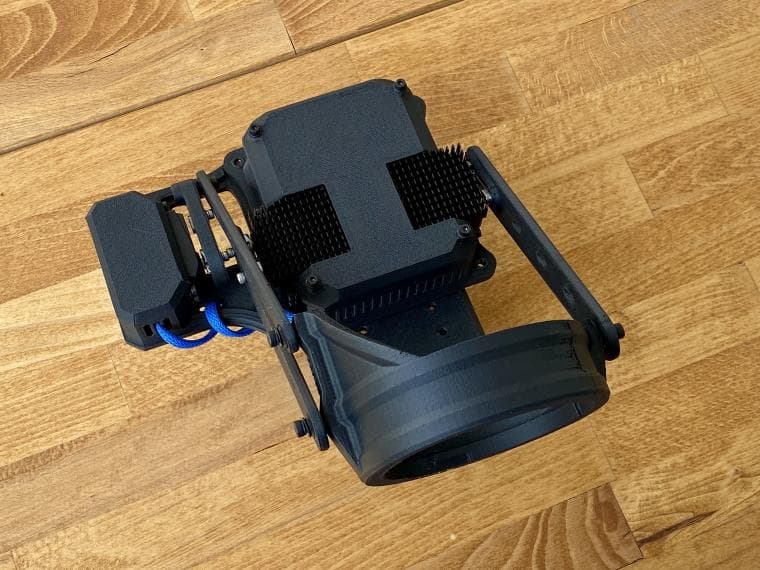 Or you could opt for a brushless servo which wears far slower. Can’t recommend any because I have not gone that route yet

I think the main factor is going to be the quality of the servos. The less money you spend, the cheaper the components are going to be, and the more likely it is that they’ll fail after sustained heavy use.

I spent a lot up front when I built my first unit over two years ago now. $150 each for the Savox Sb2292Sg. They’re still working perfectly after years of abuse, some rather severe.

I also revamped my cooling setup a few times since that first build. Initially, I just used the default lid with no cooling, but when I saw how hot the servos were getting, I quickly modified the lid to include a 40mm fan mount (this was before the official model had that option). Even after that, as I started to use faster and faster scripts, I ended up at the point where my PETG base warped to the point that the lid could no longer stay attached, and the servos were loose. 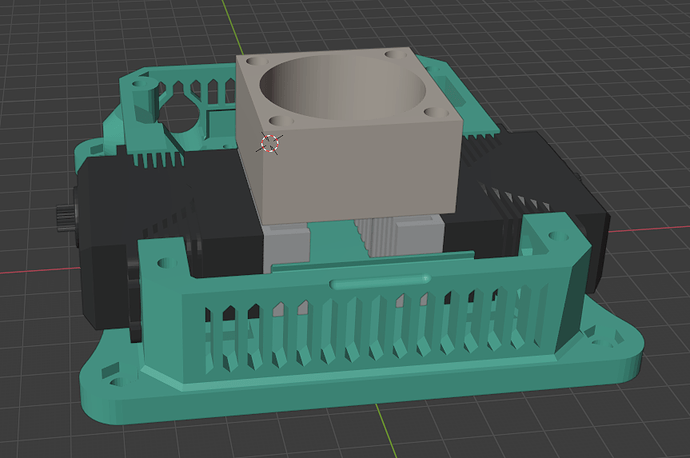 That’s a snippet from my Blender project, which has all the parts in it. I’ve modified most things, and put models of all the parts in to make sure things would fit properly before printing. I made the crude models of the fan and heat sinks. The servo models I found on a CAD site somewhere.

The servos still get quite hot, but the temperature is a lot better than it is without the modified cooling, and my parts are now printed with polycarbonate, which has the highest glass transition temperature for anything you can print with using an FDM printer. So far so good.

I also moved from this kind of servo horn to this kind. I’ve broken quite a few of the former, and they were always fairly random with the teeth inside, so I’d have to adjust the arm positions in software. The latter servo horns have a considerably thicker neck (you have to modify the arm models to make them fit), and the teeth inside are consistent. Both arms line up without adjustment.

Yep, had the same issue. First with the 20 kg servos that were recommended by Mosaic and then again later with 35 kg red servos. When I opened them up they both had the same issue where the gears wear down on the largest gear. For me I have noticed that both gears failed on the same side of the OSR2. So now I just bought more cheap servos and keep the old ones for spares if I need to replace parts.