Stumbled across Whirligig while navigating through ES and saw that some people mentioned better picture quality compared to DeoVr. [I have been spoiled by @g90ak with his AI upscaling]

-Recommend? ($4 on steam not an issue for me but do you recommend it for a Handy user)

Heresphere is better for video quality (probably the best), but DeoVR is still the easiest to use, especially if you are used to it.

Compatibility will largely depend on having your codecs all setup correctly.

Feature-wise, Heresphere has the most customization I’ve seen.

All that being said, I still use DeoVR most of the time. I have a bit of clip “ADD” and like the ease of navigation to different files. I am also a creature of habit and DeoVR was the first app I used when getting started. However, the recent UI changes are a pain in the ass so I’ll likely be jumping ship very soon.

Whirligig > Heresphere in terms of quality / performance, since Heresphere doesnt have its DirectShow path finished afaik.
Heresphere has many other advantages though. But most of its settings are more for advanced users.
Just go Whirligig and DirectShow + LAV Filters route.

I agree on performance, Heresphere needs a beefy system, but I thought that some of Heresphere’s underlying tech was unique and gives better quality. I could be wrong, I haven’t done a full a/b comparison and am definitely not an expert on the underlying engines.

The autofocus (zooming in and out, allowing some kind of movements) and the ability to fix lens issues (for example giant women in older VR titles) are unique, even though you can also scale it with Whirligig to some degree, HereSphere does it the correct way.

Whirligig also has the advantage of choosing different paths like DirectShow, so you can get smooth playback and the best picture quality if you configure it correctly. Although Media Foundation (HereSphere) is also viable, it needs like you said, a beefy system.

I have both and personally I am going to switch completely to HereSphere as soon as DirectShow is possible.

DeoVR is just not worth it. The devs destroyed the Quest app first (they went for months without acknowledging that there are FPS issues on their app with various video files and I think they still have these issues), now it seems they also go for the windows app. Don’t bother, it’s only viable with SLR streaming, not with local files.

I’ve got Heresphere and seen it evolve during the last year, but I’m a bit overwhelmed by all settings.

Where do I find the controls to compensate for those scaling issues you mentioned?

Is there also some solution on how to deal with older videos that tend to be stretched the longer from the center you get? Older NAVR videos have that issue, e.g. the original and the recently released remaster a video with India Summer. In a cowgirl scene the head of the girl is more like an egg

Heresphere has a ‘guide’ built into the program as to what’s what and what techniques to use to fix these lens issues. Also it may be that it’s easily fixable with an hsp (HereSphere profile) file which you may get from the Discord. (HereSphere) - NAVR was famous for certain issues so it may that it’s also applicable to more of the videos of the same era. The dev is happy to help, sometimes he even goes as far, as to create a profile for you for a certain video.

Thanks for your replies! Elaborate Beefy Systems…

Probably going to try out both but Whirligig first since it is cheaper and wait for Heresphere to get DirectShow (if it does) to have an apples to apple comparison.

Thanks for the help and input!

The cool thing with whirligig is that, if your pc is beefy enough, you can utilize smooth video project software to interpolate 60–>90, 120 FPS with the directshow path.

How are you getting these video players to work with the Handy?

I use ScriptPlayer and it only has support for these ones listed, unless I’m missing something? 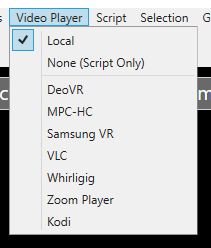 My current setup is ScriptPlayer w/Initface Desktop (bluetooth to Handy) and VirtualDesktop → launch DeoVR on the computer.

HereSphere is using DeoVR API.
Whirligig = Whirligig ofc.
For MPC-HC you have to enable Web Interface but it’s only for 2D content.

Otherwise I dont have experience with Handy and Bluetooth.
I’ve heard that some scripts feel different or jerky though and not the way it’s intended but like I said, I don’t know.

I suddenly couldn’t get anything to connect to play videos. Whirligig and Deo just won’t connect for some reason.

I meant to add that if you can get the Handy into bluetooth connect mode, you can have scriptplayer search for devices. That’s how I connect the Keon.