6.1k Videos barely run stable but need long to load. Thats the highest resolution i can run. If i try to play 7k or 8k videos i can only see like 1 frame per second. I have a 5700 xt gpu. If i look up 5700xt max resolution i find 8k@60fps, which is the same for the 6900 xt. I am considering a gpu upgrade but am i even gpu limited or is this some type of encoder thing ?

How much ram u got? I find more ram helps everything and is cheaper than gpu upgrade

i have 2x 16gb ram so that shouldnt be an issue

have you tried setting your graphics setting and selecting the app and making sure it runs on the 6900xt? hmmm search for grahic settings on the pc then open up the program then you probably get the idea…

if i think of anything else ill post it

i did download the HEVC Video extensions from the microsoft store. it didnt help.
the thing with the latest drivers from amd is that they dont work with virtual desktop. And the latest one working for virtual desktop is causing grey screen issues which is why im currently running on the 22.5.1.

vlc probably wont help since its in both deovr and in windows. Honestly it might just be a driver issue knowing AMD… Imma try 22.4.2 now . What gpu are you guys using btw?

Edit: i tried 2 different drivers and that didnt help so probably not a driver issue.

Try installing K-Lite codec pack. Have yet to come across a video that doesn’t work, and it configures your codecs so that GPU acceleration is used where possible.

If that doesn’t fix it I would check your drivers to rule it out as an issue. You can always downgrade if it doens’t make a difference for your virtual desktop needs.

You are not using quest 2 with questlink (either wireless or wired) right? In that case the issue might be gpu related indeed, as the GPU needs to process and encode an additional video stream; the one between your headset and your pc.

Make sure you’re using the Heresphere demo instead of Deovr.

I see. If you have installed K-Lite open codec tweak tool. Under fixes apply “reregister direct-show filters” and reset your settings. Try playing your video through MPC-HC after.

Just FYI; I can’t stream >6k on my gtx3060 either through questlink or virtual desktop with the video playing on my pc without stuttering. Everything plays fine using my old WMR headset which connects directly through HDMI. I now play VR directly on the headset, but if you have an original quest that may be difficult. 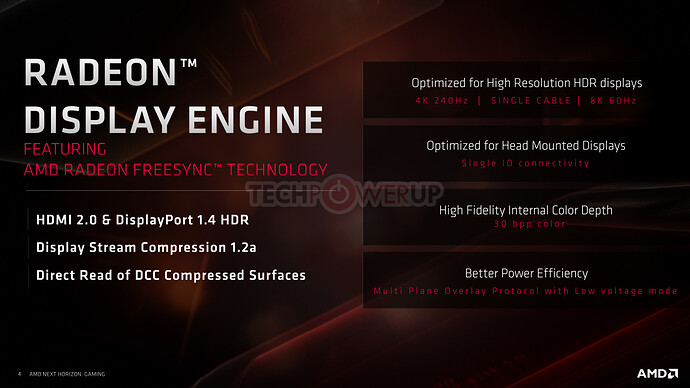 Two of the often overlooked components of a new graphics architecture are the I/O and multimedia capabilities. With its Radeon RX 5700-series "Navi 10" graphics processor, AMD gave the two their first major update in over two years, with the new...

virtual desktop is not the problem here because the video stutters in windows player and the k-lite player as well. Ive just tried the klite open codec tweak tool but it doesnt even save when i change something.

thats crazy to me that amds flagship isnt even able to run 8k @ 60 fps.

Ah that is surprising; luckily there are alternatives from Nvidia. RTX2k/3k series might be dropping in price with RTX4k series around the corner.
But please refer to my earlier comment about streaming video to the headset and decoding at the same time; you will probably still run into issues. I went with the Quest 2 and now play my videos directly on the headset.

to me it seems like you might be limited by your bandwith / wifi. I have a 1k MB connection and my router is right next to me so i feel like i wont run into issues with that. Also i hate to use cables, id rather watch low quality vids than being limited in my movement.

Let me be more specific; the part of the graphics card in your pc that is responsible for decoding the 8k h265 video stream into a working image, is also simultaneously used by virtual desktop for encoding another H265 stream which is to be displayed on your quest.

Virtual desktop us mostly used for gaming I reckon where other parts of the GPU are used, and the media component only has to encode the rendered frames to a video stream in which case there is no bottleneck.

i just wanted to try out the xtplayer but seems like it doesnt support bluetooth.