I don’t use funscript.io myself, but one of my scripts has a really funky issue where the duration is messed up and doesn’t play here. My other 3 scripts work fine. This script works fine elsewhere. It seems to be something baked into the metadata in Openfunscripter and I cannot fix it no matter what i change.

Just trying to get this sorted so that it doesn’t happen again in the future. I’d like my work to be playable everywhere if possible.

I haven’t looked at and/or tested your funscript but…
Can’t you just open it in OFS, add something small and save it as another new file with a different name…
Does the problem still exist in the new file?

The new script has the same issue with the duration. It shows up as the same super long duration.

Here’s the same identical script with that removed, which shouldn’t have a huge duration

Good news: That works, thanks!
Bad news: No clue why it happened in the first place.

Each of those “at” ’ s should correspond to a point in the script, but there is apparently a random, invisible point at the end of the script that I can’t change. I see the same metadata come up in OFS, but even when I mess with my points. it still exists. 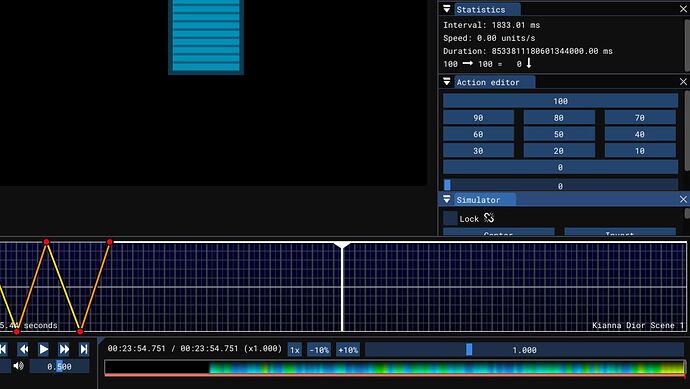 No idea, you should go ask in the OFS thread, seems like a bug

Seems to be a one-off thing. I have made 3 scripts since then and none have had this issue. If it comes up again, I’ll follow up. Thanks again for the text editor tip!

Without knowing what caused that action to be there’s nothing I can do in OFS either.
Except provide tools to remove it.