Hello, as mentioned in this thread: https://discuss.eroscripts.com/t/feature-idea/28757

I am sharing with you all the script player I’ve been using. This is a player I made myself after not finding any good player for Linux that fit my needs.

This player requires python and mpv to be installed on your machine. it is also recommended to use it with special actions from your file manager to easily launch it from any video file. seen below.

Here is the readme for more information on how to install and use this script. Enjoy!

Simple script to play funscripts using mpv and the power of python.

Get the script here: 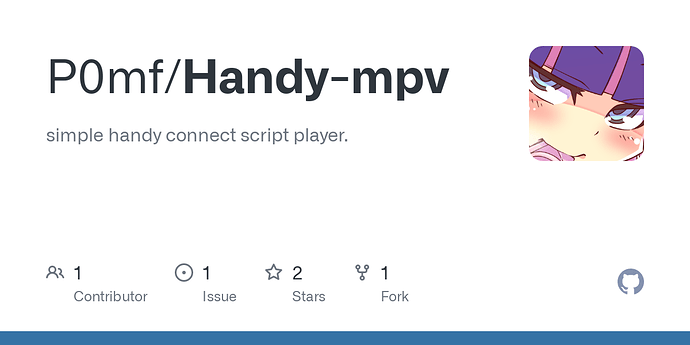 I can finally stop using browser for my handy. thanks for this.

happy I could help! didn’t think anyone else was in the same boat as me. I’d have shared it sooner.

What would be required to enable local playback via bluetooth and/or local handycontrol instance? I just got my unit and wanting to contribute to improving quality of life on *nix.

I’m not familiar with how the bluetooth works for the handy, but for local playback, I think it’s just a matter of changing the server for the handy api calls. You just need to keep the endpoint that converts funscripts to csv, since I don’t think this comes with the local server.

Sorry for the late reply, been busy working on other things. I’ll be pushing an update soon, couple stuff broke for me after updating some local libs. probably should figure out how to package this as an executable.

Thank you for this! Can’t wait to get it set up

Hello! thanks for the interest!, the video is “Fap Hero - Ero Festival” I think I got it from one of the big script archives torrents that are floating around on the web. I can give you the script tho, believe liquid made it.