How to Get Scripts from Fantia

The site might be difficult to navigate for non-Japanese Fella. Luckily Fantia now has built-in UI translations. Scroll to the very bottom, or find the language setting on the top-right corner.

This will only translate the UI and not everything on the site. You might still need assist from a few translation tools to understand what the creators are saying in their post.

The platform is not just limited to scripts. To search for scripters, search under “クリエイター” (Creator) and set the filter to “プログラム” (Program).
Or simply follow this link: 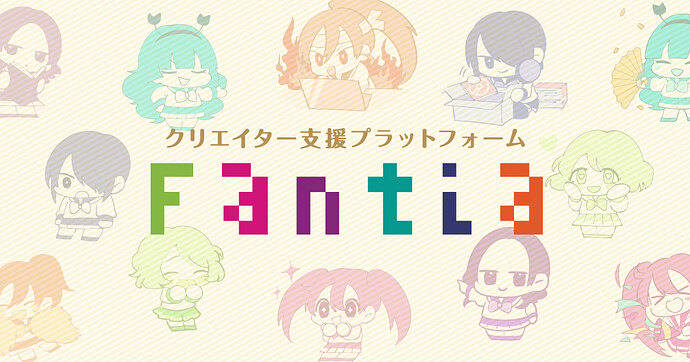 If you are looking for scripts for a specific work, search its title under “投稿” (posts) and see if there’s any luck.

Although scripts are dominant within the category, “クリエイター” (Program) can include any computer software. If you are seeing a lot of unrelated results, try adding the keyword “連動” (Sync) to your search.

There is also this blog site which summarizes scripts posted on Fantia. It’s not a complete index, but may help you locate script and content of your liking. 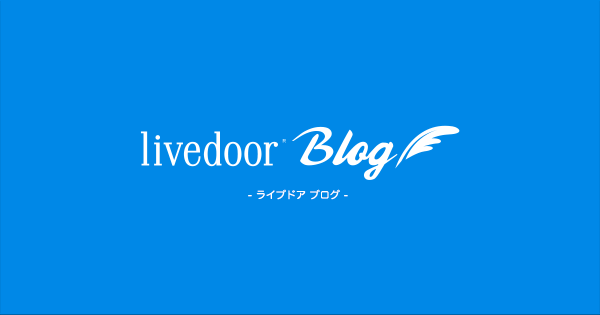 Akin to Patreon, Fantia is a support membership site, which means a handful of content are locked behind a pay wall, so have your credit card ready.

Nonetheless, you will at least need a Fantia account to download the free content released by creators. Because most scripters make their files “Fans-only” (which includes free fans). 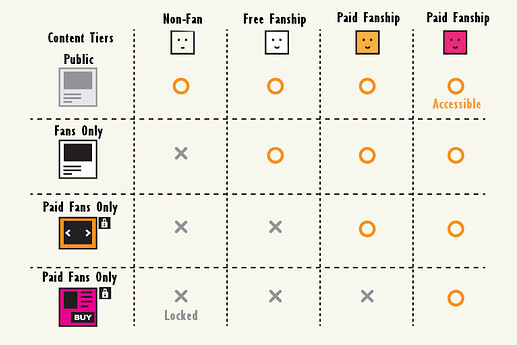 Membership Tiers are referred as “プラン” (Plan). You can find them on the creator’s page. Joining any plan will make you a fan and unlock any free content. Most likely you’ll want to start off with a free plan. 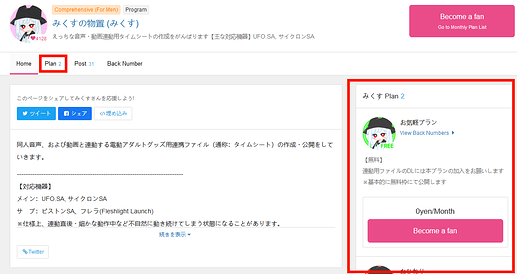 plan1166×620 52.7 KB
You’ll find scripts attached to the bottom of a post. They will came packaged as zip archives (because Fantia doesn’t support all format).

Check the red text above an attachment. If it says 無料プラン(0yen / $0.00USD) it means it’s a free script. You can download it straight away. 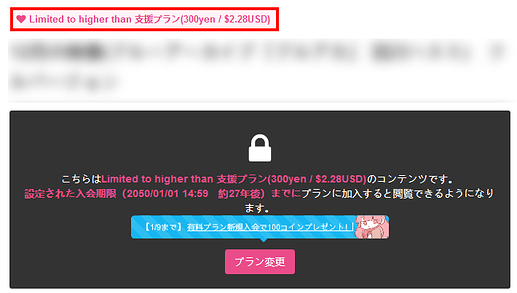 Note that some creators release half of their script as a teaser. You still need to be a paid member to obtain the full script. Skimming through the description would be helpful.

A common Patreon strategy is to join for a month, grab all content released to this point and cancel membership. Wait for a few months and do this again. Sure, that can be done on Fantia as well.

However, if a creator has “バックナンバー” (Back Number / Monthly Issue) enabled, no cheese for you.

It means you will only have access to content released within the month you’ve paid for. Content released in the past will be will be packed into monthly issues and locked away. To unlock them you’ll have to buy them individually. Price per issue are the same as monthly subscription of the plan they’re limited to. 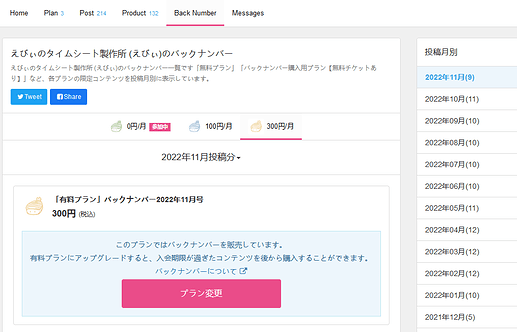 
Be wary that you can only buy Back Numbers if you are currently a paid member. Which means if you want a monthly issue in the past, and you are not currently a paid fan, you have to first pay to become a member of current month, then pay again for this particular Back Number.

“商品” (Products) are standalone purchasable content. A few creators release individual scripts as product. If you just want a script for a particular work rather than all of their scripts within a month, this will save you on the brain damage of dealing with Back Numbers. 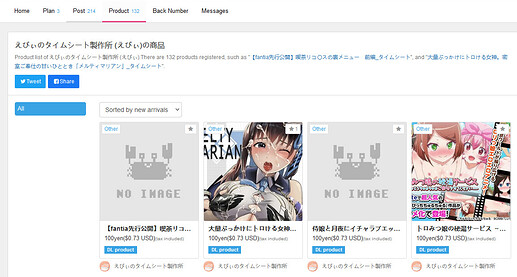 As much as paywalls are everywhere, there are still scripters who release their work for free, and use the paid plan solely as a donation option. I urge you to check out their work, and please please, support them if you like - it doesn’t have to be monetary.

Hand holding ends there. Below are things I consider worth noting.

Always check which model of device the scripter made their scripts for.

VORZE is a pretty signifant brand in Japan for interactive toys. A lot of scripts on Fantia are particularly optimized for its A10 Cyclone / Piston SA.

A10 Piston SA is a stroker device. Scripts made for it are generally compatible with other strokers such as the Handy.

A10 Cyclone SA is a peculiar device that spins rather than strokes. Scripts made for it may work on strokers, however can feel horribly off due to the difference in operational mode.

U.F.O. is a series of nipple massager. Some scripters includes scripts for these as well, especially for works featuring nipple licking scenes.

This isn’t necessarily a thing to avoid, but I find it worth noting for the Handy / DIY Robot users.

As mentioned above, VORZE products has a far greater popularity in Japan. They uses Bluetooth connectivity, and doesn’t come with an all-powerful servo. As a result, expect some plain up-down strokes in scripts made for these.

opt815×281 99 KB
This is ideal if your device use Bluetooth as well. But may seem a bit mundane should you own the Handy, OSR2 or E-stim devices. And there’s also your personal preferences involved. Nevertheless, both will do the trick at milking you out.

Scripters may also include multiple scripts in the zip archive they share, each for a different device. The actual scripted content are usually just the same with different speed caps.

Less can be More

Most Fantia scripters script out of their interest and don’t take requests. Following too much scripters at once may adds to your burden of collecting scripts and content. Keep in mind that a lot of the video content are paid as well.

Try out a creator’s freebie scripts before joining their paid plan. Check for device compatibility issues, their choices of content, and whether you like their style of scripting.

If you have a particular content that you’d like a script for but hasn’t fall under their radar, search for these content separately. And don’t forget EroScript exists. A great community btw.

Learn to Script Yourself

If it’s just a script for 30 sec animation, instead of paying 300JPY and sign one month’s contract of content delivery, might as well script it out yourself.

Try it. It’s not hard. And your own script feels amazing.

How to get started with scripting howto

Last update: Jan 28, 2021 Introduction This guide is for all of you who are new to scripting. It covers the fundamentals and contains some tips and tricks that might be valuable for both new and intermediate scripters. This guide was originally written by Sentinel, but lots of tips and tricks have later been added from numerous users who posted in other forum threads. Thanks goes to: raser1, realcumber, jacecolm, relax, scibbles, dungeon_master, slibowitz, ricster89, husky5383, dabmerino, re…

Due to reasons mentioned above, I’d abstain from recommending any scripters in particular. Please dig around and find the one whose work you enjoy!

One exception, however. Please check out OG9. They are the only one I’ve found on Fantia who makes free scripts optimized for the Handy, which are highly polished and delightfully detailed.

Ya, this could solve a lot of problems with some people here. Thank you!

I remeber going down this rabbit hole and i basiclly just wasted money. There were so many paywalls the creators posted. And the scripts i did get were just horribly off cause of device incompatibility. Im sure there are some good creators out there with good content but man i could not find any.

what a quality post, thank you for sharing.
I was surprised to see how many scripts/scripters are over on fantia

Is there a way to do this without a credit card or using a phone number as registration?

I tried using the Ali-Pay method where you buy those coins but it keeps linking me to some chinese website that’s asking for my phone number.

Hmph. I don’t remember having to give my phone number off. Ali-Pay is a service aimed at Mainland China, no doubt you’ll be asked to deal with those.

Try your luck topping up tora coins here. It seems to support card and bank transfer. 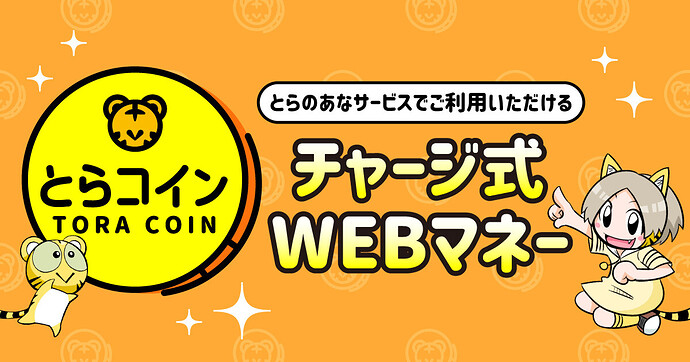 The bank transfer option requires entry of a name in katakana

All the services like FamiPay PayPay auPay appear to be japan only.

The bank transfer option requires entry of a name in katakana

All the services like FamiPay PayPay auPay appear to be japan only.

Woopsie. No ideas then…

VISA, Master and Ali-Pay seems to be the only international paying options. Then there’s top-up codes sold from Masodora which ends up with Ali-Pay as well.

Hey thanks for trying to help.

Masadora was the website asking me for phone ID.

My eu life never needed a credit card but it looks like the best option here.