How to replace a servo? (OSR)

I’m a total newbie but I’d like to replace the stock 20kg servos of my SR6 with these 40kg ones: AGF A73BHLW Vollmetall Wasserdicht Titan Getriebe Brushless Servo 40Kg to reduce the noise

Is it difficult to replace them, and are there any guides online on how to do it?
Also, has anyone tried that 40kg servo/know if the servo I linked will work?

yes just about any servos will work .fyi the XX kg doesn’t mean quieter for anyone looking at this . for replacing the servos in a sr6 is more time consuming and do need to know what you are doing to plug each servo in the correct spot on the esp32 and how to put it all back together because changing servos requires you to basically take the whole sr6 apart to get to the bolts as to guides on how to the best guide to look at is the one from tempest himself as a video guide isn’t just something you can watch and figure out how to build one much less replace servos as every one is built different https://www.patreon.com/posts/january-release-61928569?utm_medium=clipboard_copy&utm_source=copyLink&utm_campaign=postshare_fan or newest plans on the Discord EDIT* forgot to say main servos are 180° and twist servo is 270° . can use 270° for main servos but requires editing tcode

Oops, I didn’t notice the servo was only 60° at all, thanks for pointing it out! I’ll get a different servo instead then
Edit: This servo does actually do 180°, but that website only shows its rating at 60°

I think the idea is to get a servo rated for higher strength than is needed, since then it should never max out, avoiding loud/high pitched motor noise. From what I’ve seen, higher power servos won’t decrease the noise level to what most would wish it to be (near silent), but it will remove some of the very annoying high pitched sounds, and from what others have reported it can remove anywhere from 10 to 20dB of noise.
Could any one fact check me on this? Hope I got every thing right

This is really helpful, thank you!

heres a better one for you 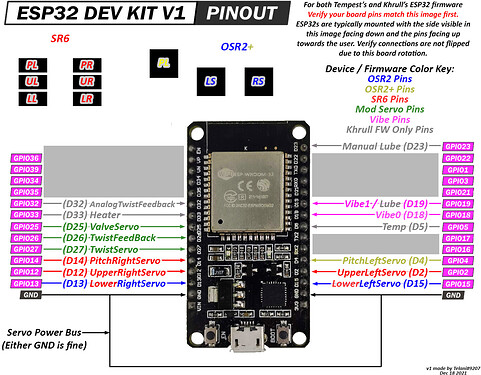 This is exactly what I was looking for, thanks Dime!