I can't find this anywhere. Manually make scripts without video?

Im looking for any way to make scripts without a video. I might be blind or something, but I just can’t find it. It seems that both JoyFunScripter and OpenFunScripter requires a video to make a script.

I simply just wanto make a script by hand, select its length and height, speeds etc without any video.

If anyone could guide me in the right direction, thank you!

Do you want to create patterns? You can use excel for this. HandyControl can import Excel data to create scripts like this or similar ones.

I think this one had a video but was scripted off sync. You dont have to share or use the video afterwards if you only want the script.

If you want to record action I guess you could also just load any video in the scripting apps and just ignore whats happening on the screen.

Or use this as video

Thank you so much.

I think that is what im looking for. Excel. Just to make patterns.

Is there a guide anywhere on how to do this?

Not as far as I know. I have just written myself some functions and combine them to create curves.
You can use diagramms as preview in Excel and copy and paste parts.
But it heavily depends on your Excel skill how well it is of use for your script

The second script image is not from me. Not sure how it was build.

I have no idea where to begin here.

How do you write functions? Numbers? Could you give some examples or/and screenshots. Would be much helpful.

This is just an example. I have not tested this script.

This page is the setup where I can move some sliders. Add beat patterns. Adjust the lenght and get a preview. This page changes all the time and I add, remove elements depending on the script. 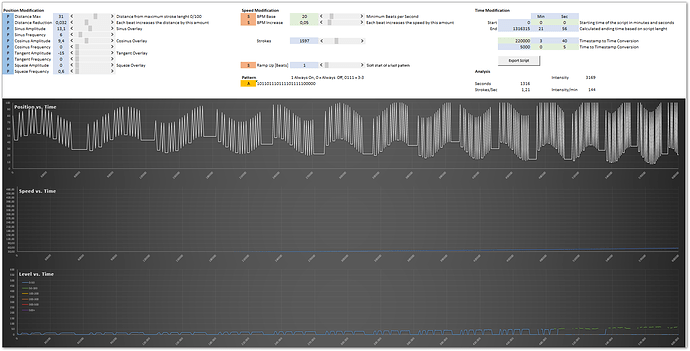 The second page does all the calculations. It’s filled up with formulas and produces 2 export columns (timestamp and position).

Now I could just copy sections from the script and paste them in another table to combine them. Shifting timestamps and so one.

Currently I am creating full scripts in one go. Maybe I do pattern merging later.
I also had the idea to include this Excel Editor in HandyControl so anyone could create those scripts on the fly.

Hope that helps to get you started.

Thanx for the illustrations. That looks very nifty!
Did you make that excel page yourself? And is it possible you can share it? Or do you perhaps want to keep it to yourself.

Yes I have build this. It is more like a playing area where I try new things. Not everything is good and stays forever. It changes alot. The excel sheet is not meant to be used by someone who dont know how it works in the background. I think the formula language would also be a problem in other countries.

As I said, I might implement some of the functions to HandyControl one day.

Honestly. I still have no idea where to start, even with all the screenshots. I don’t understand the correlation between the random numbers that is a funscript to how they turn into a graph.

Someone should do a tutorial how to make patterns in excel, and the meaning of the numbers.

Hi, I am new here and this is my first post here in this forum.
I’ve downloaded the example “Clipboard2010933.funscript” file from @Lucifie on the top.
I took a look at the file with simple Notepad-Editor and it seems very self-explanatory to me.
Here is a cut out of the first part:

As you can see there is a bunch “unimportant” (for the Handy to work) stuff first and the script itself starts at this part:

and there inside is only one repeating thing:

I was reading this for some reference:
how-to-get-started-with-scripting/2234#stroke-length-and-scripting

It can happen that some “.csv” files are shown different like this:

This is simply because there is only a “Line Feed” character instead of “Line Feed+Carriage Return” characters.

So no more information than position and time in the “.funscript”/“.cvs” files that the Handy is using to work.

All other things like speed and pause is a direct product of the “when,where”.
I hope this info is somewhat helpfull for other newbees here.

Have a look at this one:

A few people have asked, how Excel could be used to create scripts or at least how to build simple patterns. I will use Handy and the app HandyControl to show you how it can be done as it supports an easy to use Excel import/export feature through the clipboard. In the download folder of the app you can also find a script collection that is solely build with Excel. Notice: You should have a basic understanding on how Excel works and how to use formulas or you will have a hard time to get thin…