Hey guys,
I bought a handy a few months ago, and am really happy with the purchase so far; but I’m wondering whether it’s worth upgrading from the standard sleeve to something which might be better.
I’ve been tempted to get a fleshlight, but I’ve heard that due to the extra weight the handy can struggle to keep up with the faster movements on some scripts. I’ve also seen recommendations for some open ended sleeves - something I’d like to avoid as I feel like it could be very messy.
Anyone have any recommendations for what you feel is an upgrade from the default handy sleeve based on your own experiences?

If you have the original Handy sleeve, you can upgrade to the 2.0 sleeve. They also have released other sleeves. Alternately, Fleshlight Quickshots are a popular option. Most use them without the case as they can be a bit tight. My favorite sleeve is the Fleshlight Fleshskins Grip (I snip out the bit of material where the finger grips are so the band can slide through). Beyond that just do a search here, The Handy Reddit group, or their Discord and you will find many more recommendations.

Japanese onaholes are so much better than Fleshlights. I’ve yet to try them with Handy since my Handy sleeves are still really new, and finagling the onaholes to stay put might be a problem.
Mind you, there are ridiculous amount of different onaholes, all of them different in multiple ways. Some might fit a Handy better than others.

Highly recommend giving a quick shot a chance, open-ended has its advantages. Being able to add lube when needed is very nice

and there’s not as messy as you might think. 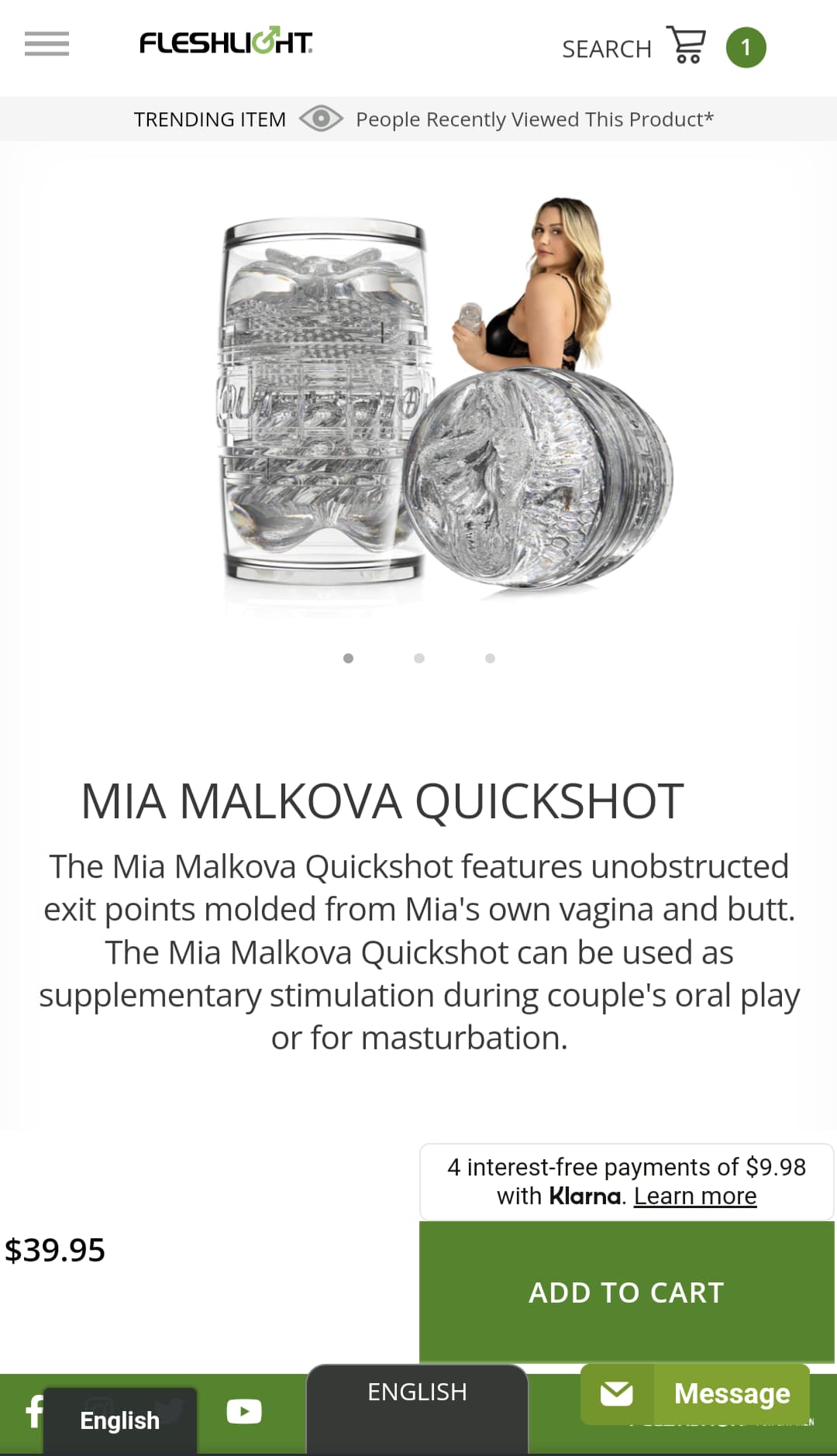 Do you have link to the review pal?

nope it was made on the SLR/RS scripters discord channel, and as i didnt write it, it is not up to me to place them here.
But i’m looking for a replacement of my handy sleeve myself, and i think i will buy the lips.

I noticed the handy motor is pretty strong in comparison to the Launch. I had the motor give out on the launch well before the time I spent on the handy, my handy is 15 months old and still going. I cut about 60 percent of a fleshlight case and cut about 40 percent of the the fleshlight sleeve ( who is 12 inches anyway, AiR?) Then attached them with a clamp to the fleshlight. It’s been doing well but I think I am going too try a lighter sleeve and case just to cut down some of the weight. But yes, you can use something with a case just watch the weight.

Just my experience to throw in here.

Thanks for the replies everyone! Very appreciate appreciate your thoughts on this topic

It seems there are some reviews for the new handy sleeves on their store page:

Seems some reviews of the Lips indicate it might be a little tight for those of average size or above but the reviews for the Lotus are overwhelmingly positive it seems.

Think I’ll likely pick up one of these sleeves soon, and will be sure to share my thoughts when I do!

Ordered the lips and hand sleeves, I’ll post a review after testing. I’ll post some pics of the sleeves as well, the ones on the handy site are a bit limited.

Have recently ordered most of the handy sleeves, so at this point have tried every handy sleeve with the exception of the Hard open-ended sleeve because it wasn’t in stock, and the TrueGrip gen 2 because I found the gen 1 to be just so rubbish honestly, that it removed all my willingness to try the Gen 2, even if I know they don’t really have much in common.
From my testing, all the new sleeves are an upgrade over the original, also my experience with them makes the firmness chart on the handy website completely useless to me, because I would describe them wildly different than what they rated them at, where for me out of these the Truegrip original might be the more aggressive of them all.

From my testing the touch is significantly more aggressive than the rest, open-ended, very short, so even an average member will be constantly going in and out of the tip, which is what for me makes it a more aggressive/intense sleeve, but would still say it feels fairly good, just not great for long sessions since the penis will adjust to the roughness.

Then out of the 2 open-ended collections I tested, as their names would indicate the soft is the softest, and is pretty soft, but not too much, they are both good, however my preference out of these 2 is for the medium which is slightly more aggressive, but not too much so, still would say significantly below the touch.
They are both longer than the touch, however would still say an average member will be going in and out of the tip a fair amount, just not as much as the touch. Which to clarify isn’t a bad thing from a pleasure standpoint, it feels good, but it does make them messier to use given you will pretty much be guaranteed to splodge outside the sleeve.

Then tried the Lips and Lotus, personally the Lips is probably my second favourite after the medium (I quite like open-ended sleeves, don’t use the top cover on fleshlights for example), It is also I believe the only sleeve from handy that is not symmetrical, Shop_content_Lips-detail.jpg (1200×1200) (wp.com) if you look at that photo you will see that there will be bumps inside the sleeve that are different (bigger and more square shaped) from the rest, these are only in 1 side of the sleeve, so unlike other sleeves where their rotation won’t make a difference on how it feels, in this it does make some difference.
Regarding the lotus, honestly it felt so soft that when I wrote my first impressions down I wrote that it felt like it was almost as if there were nothing there, which was confirmed when I flipped it inside out, it is by far the softer texture, since it is pretty much just empty of features through its length.

For context though this is a recent acquisition so I have only tried most of these twice so far, so very early opinions on them, especially since I ordered some other stuff (not from handy), and have been trying it out, including different lubes.

Anyway unfortunately from my experience with this (having tried a few dozen different sleeves and what not), it is very much down to personal preference, and you kind of have to test things to know what you will like or won’t like, have written down some of my thoughts on that here Handy sleeve alternatives - General - EroScripts where you will also find more discussion regarding alternatives to the sleeves.

For example, I disagree with the other user opinion that Japanese oneaholes feel so much better than Fleshlights, they are perhaps higher in general quality, but have tried a few different tenga (some flip orbs, flip zeros, and eggs), and have a few different Japanese onaholes, and the tenga stuff would say were all inferior in feeling from my test (they were more practical though), some of the Japanese onahole I got were straight up trash, while others are, in fact, pretty good.

Which to be fair is to be expected, they experiment a lot more than fleshlight does, and you have significantly different formats of onaholes there, like this one https://www.toydemon.com/masturbators/onaholes/meiki-no-syoumei-05-zhang-xiao-yu would say is indeed better than any fleshlight I tried from a purely quality standpoint, and would say that given enough purchases I could find one in that format or whatever that would feel even better, much like I did with the fleshlights, but the format also makes it unusable with an automated device, which makes it significantly less enjoyable to use, it is much harder to clean, and almost certainly far less resilient (expect use in an automated toy would destroy it in no time).

Speaking of that particular format, it is obvious that the weight of it makes a significant impact, so I don’t think we are comparing like for like, I’m sure a full on sex doll, or even one of those 10kg hip sex toy things will feel a lot better than a fleshlight, but it is a fairly different format.

Thanks for the review and thoughts on the Handy sleeves dude!
Think I might well go for the Lips sleeve

Where did you order from? I’m curious as the EU/UK store says “available for preorder”, which has me anxious to order - especially as I’m moving house soon.

I’m not sure about the UK, but I ordered mine and they are on the way now. I think the handy site may need to be updated.

Yeah that means nothing, it said that when I ordered it too, and it was delivered along the other ones in about 1 week time.

It’s a really good alternative to quickshot brand. It’s light, open ended and have a perfect design, even it looks weird. Using it inside the quickshot ring is an alternative method which i could be fairly endorse.

Figure, I would post some pictures of the insides of the various sleeves 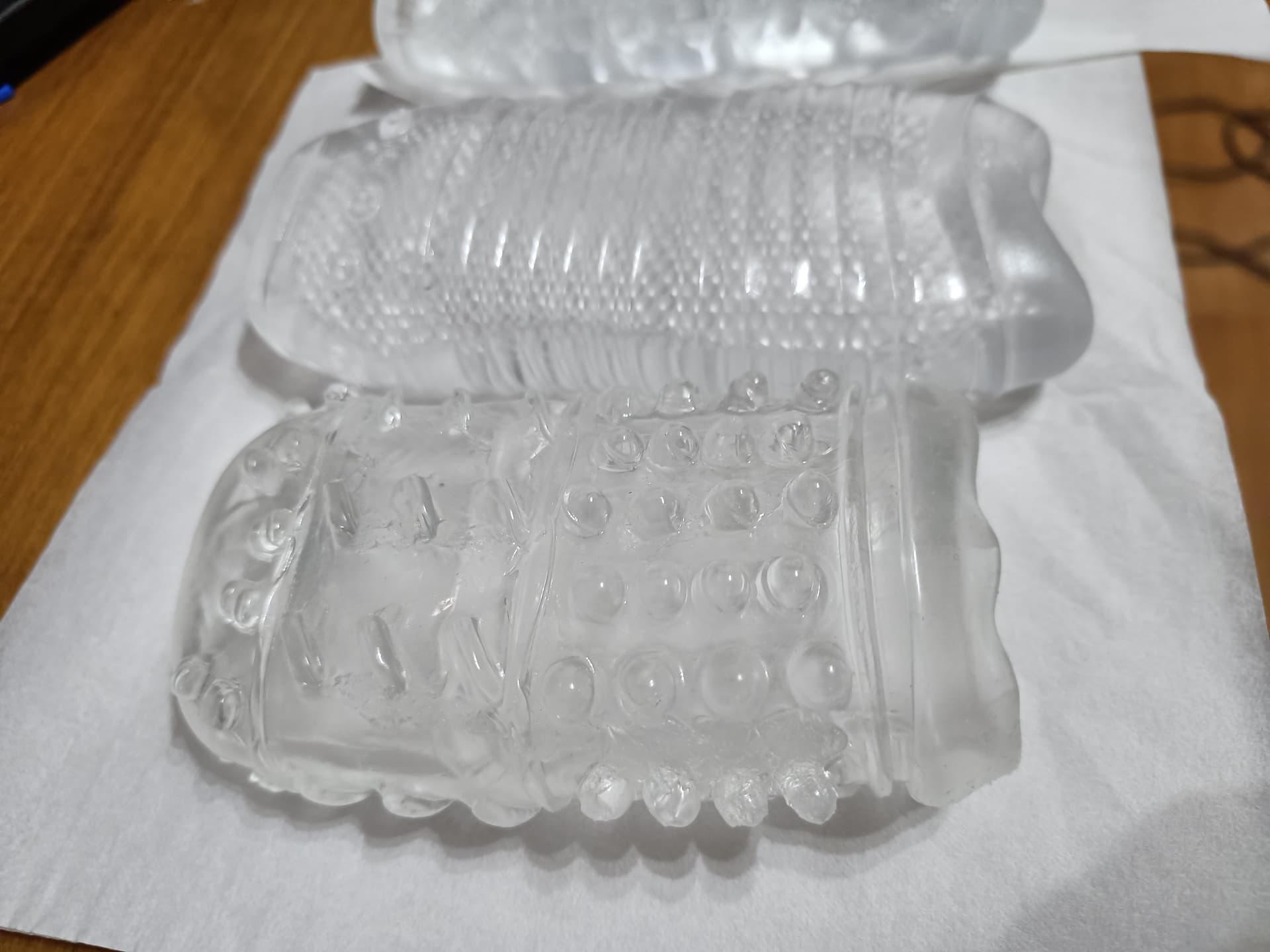 TrueGrip the original “Gen 1” sleeve that is included with the handy. 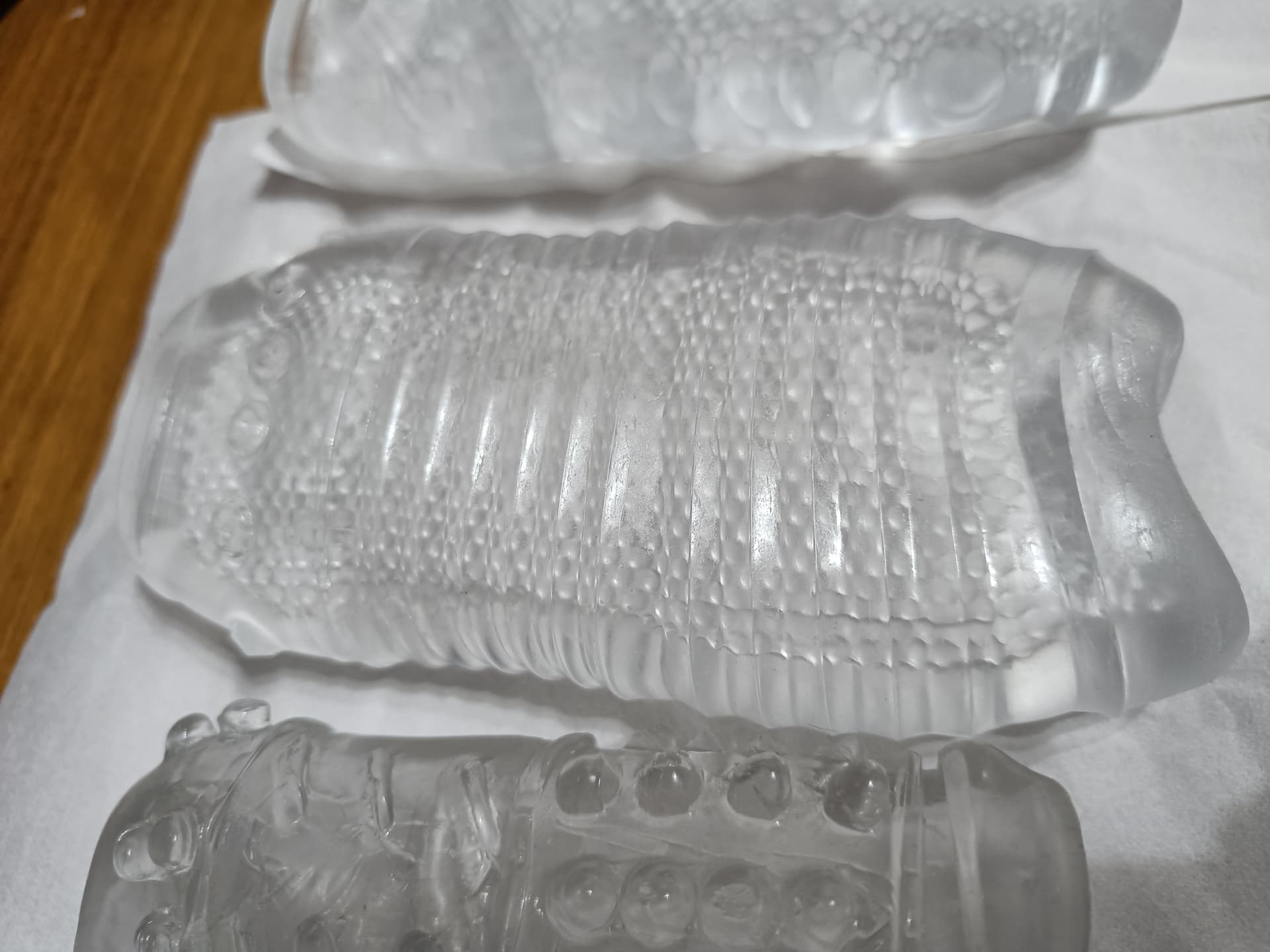 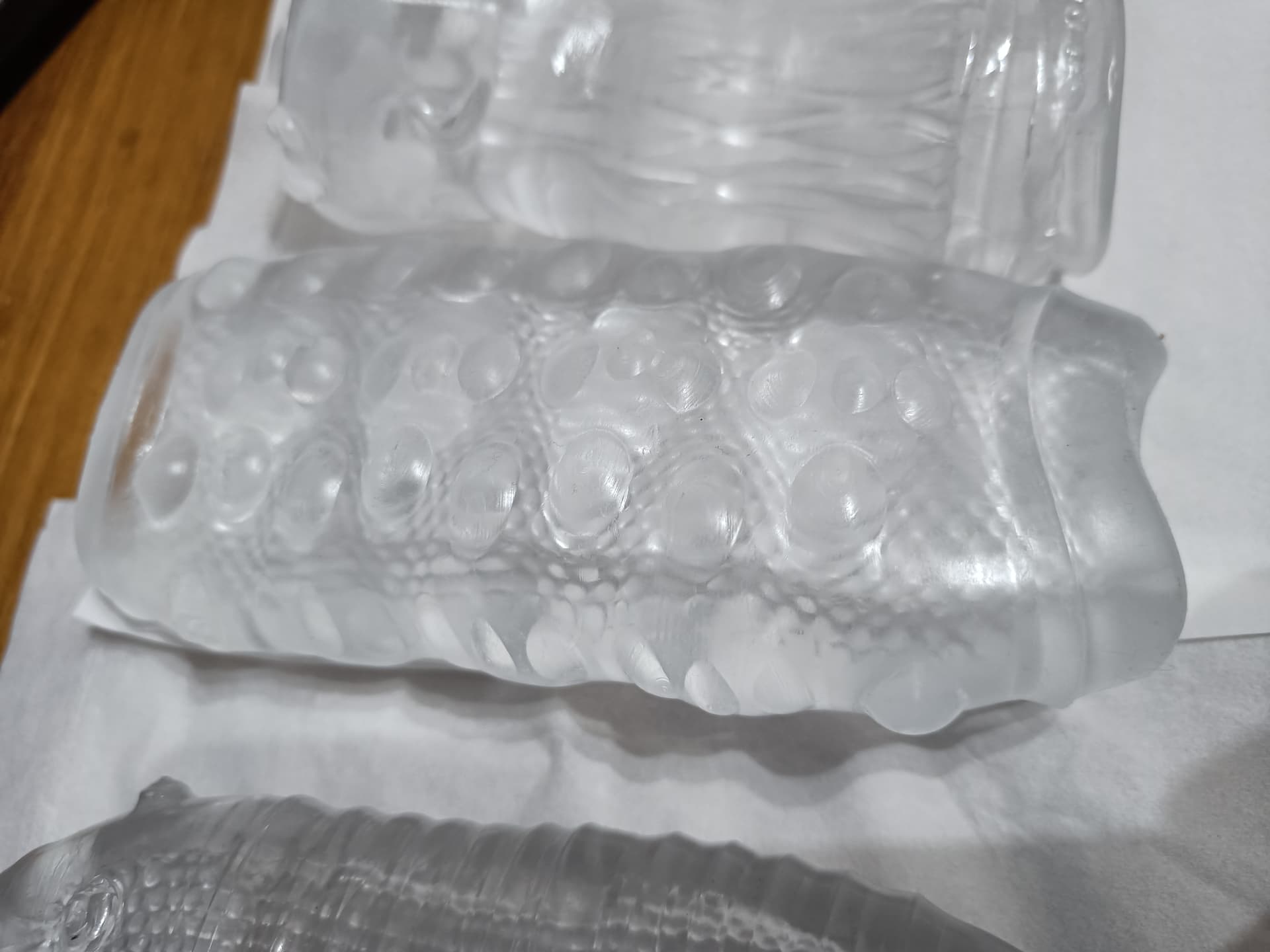 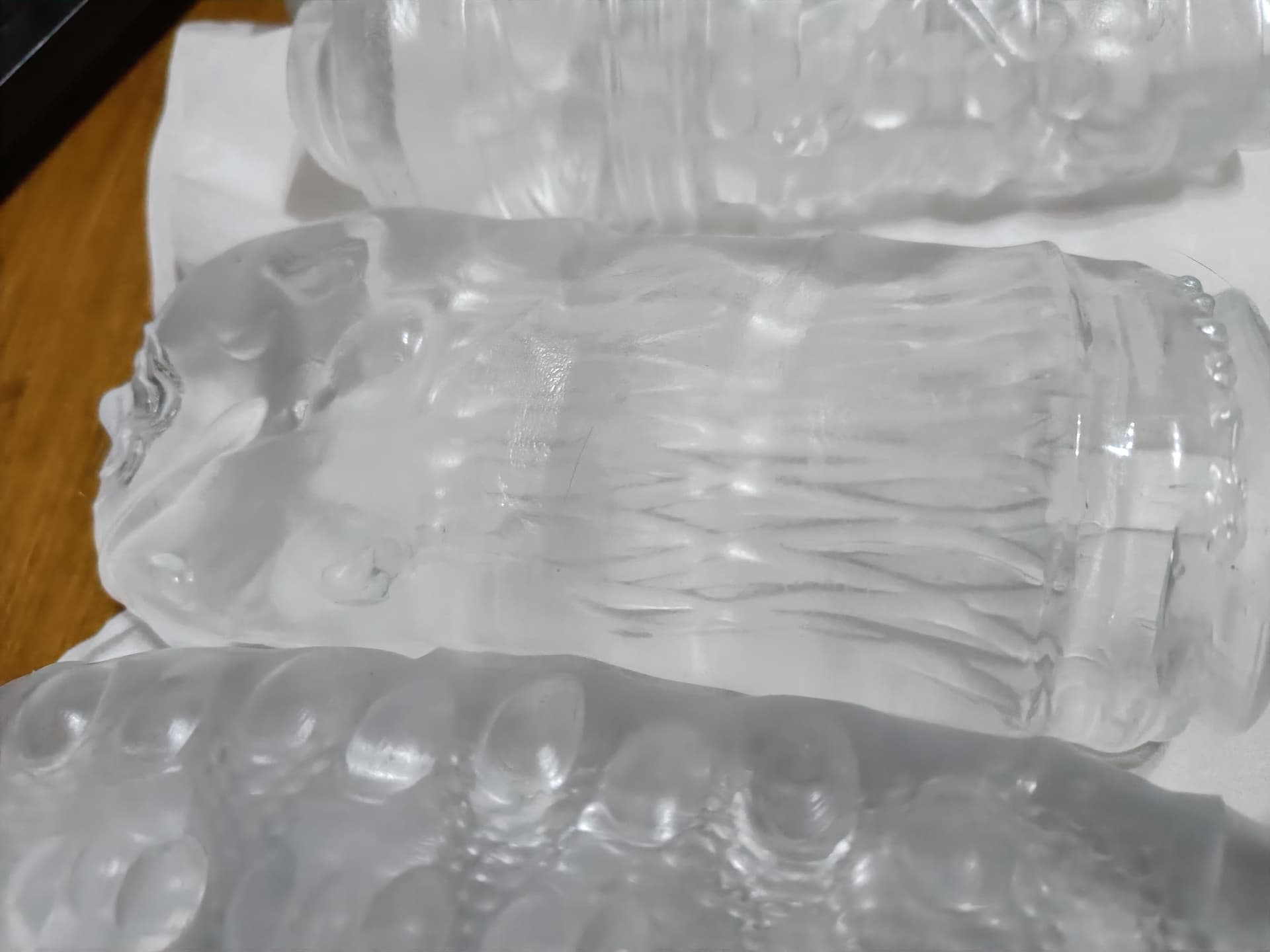 Lotus, the “vein” like texture is actually the outside of the sleeve showing through the inside, the inside as can be seen is pretty much devoid of features for most of its length. 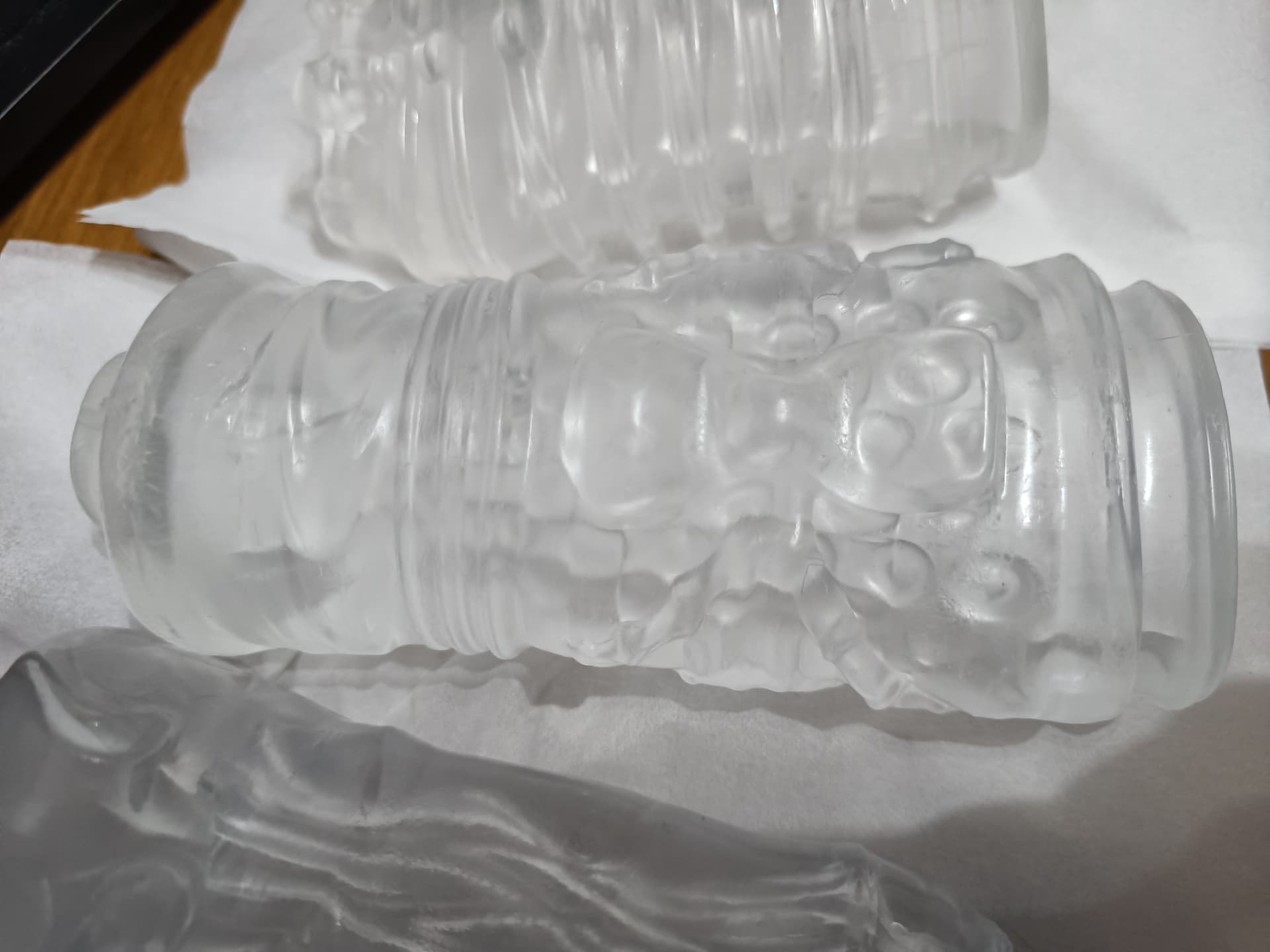 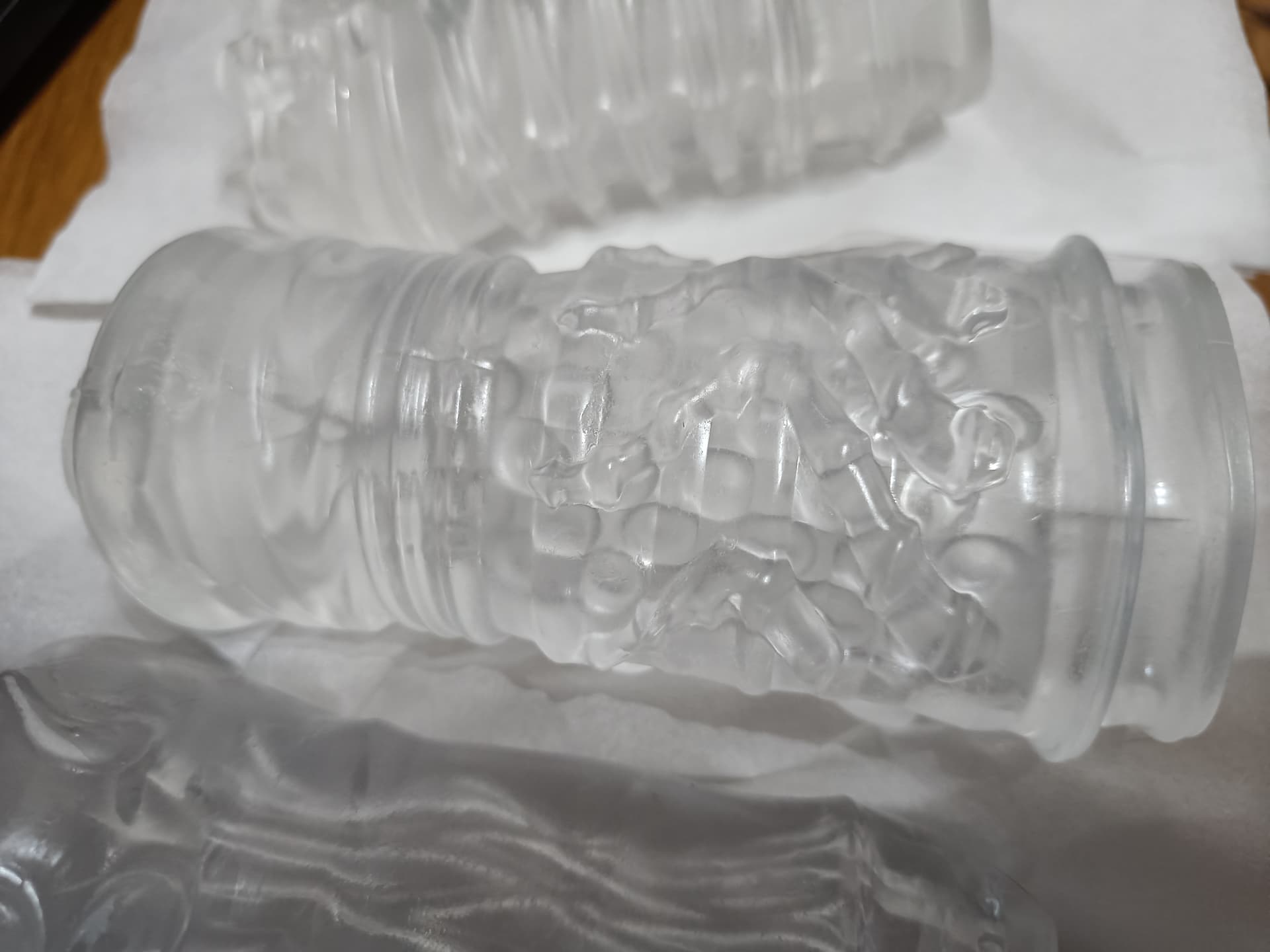 The 2 photos are of the Lips version, as can be seen it is non-symmetrical. 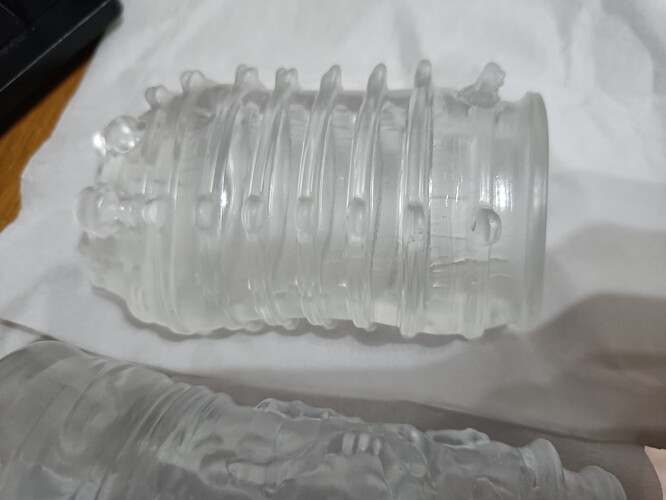 I got the lips and lotus. I don’t know if anyone else has this issue, but when i strap the sleeve at the base, the strap will always slide to the middle.of the sleeve, so stuff thats supposed to stimulate the tip is floundering in no mans land.