Slight delay when testing funscript with The Handy

Hi,
I am doing my first try with creating a funscript for The Handy.
I have done a few minutes of the scene and decided to export and try it out.

When testing, it seems to me as if there is a bit of delay compared to what I did with Open Funscripter. It’s maybe half a second.
Testing happened with DeoVR and an Oculus Rift S. The video file is encoded in h264.

Has anyone experienced something similar?

I believe delay from the Handy can differ day to day depending on the amount of activity on their servers (since the signal is relayed). I think DeoVR has a Handy delay adjustment in the options (I know SLR does). You can adjust that setting to sync the script and device timing.

Thanks for the tip. Then I assume the delay is not caused by the script but by the device/hardware.
I haven’t seen a delay adjustment option, but I remember that DeoVR shows a purple symbol on the top of its window and whenever I click on it, it says that I need to log in first. I guess I should ask the Handy support about this.

When DeoVR is connected to TheHandy and the script is loaded open the settings menu by clicking on the cogwheel icon in the video player control UI (if it isn’t open already) Select the options tab. At the bottom you have a delay setting where you adjust the script playback to compensate for network and server lag, -50ms is sufficient for me but it varies.

Unless you have a really bad internet connection or being geographically very far away from TheHandy servers you should never need to compensate for as much as a half second delay. Most adjust fractions of a second (-50 milliseconds in my case). Regardless, try adjusting the delay setting and see if it helps.

You can check your latency by connecting your Handy at the manufacturer site HandyFeeling . Drag a video and a script into the boxes and then you should see the latency in the lower right corner (beneath the slider controls), e.g. Latency: 46.94 ms. This means that you need to set -50 ms delay to compensate for the delays caused by network and server. 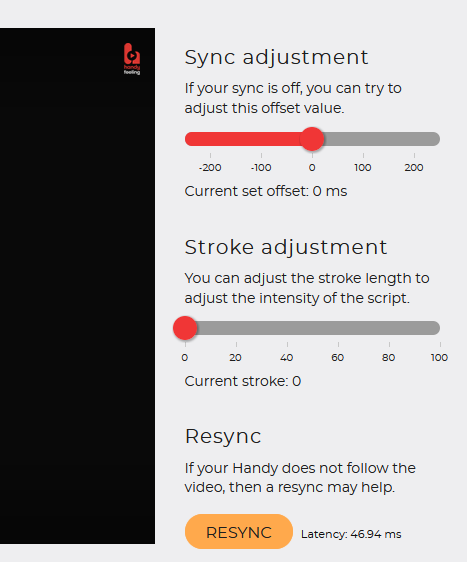 Thanks a lot! That solved the problem. I was not aware of the delay slider in the settings and checking the latency helped me making sure that it works as intended.