A quick Google search later and I found Stash which does everything XBVR does but better… Except I haven’t figured out how to make it work with any funscript players yet.

Before xbvr officially added funscript matching it was possible to just rename the script to the scene title (the title xbvr shows deovr) and deovr would do the matching.

Stash serves the video as a direct streaming link and doesn’t presently have support for external players (although you can copy past the streaming link into vlc and play from there).

It does have dlna support so it’s still useful for organising a growing collection but I’ve been spoiled be XBVR’s UI and video previews. I’m still messing around with it but so far the stash UI seems even better and it seems such a shame that it can’t be used in conjunction with funscripts.

Stash is open source and seems to have lots of people actively working on plugins and new features… I have 0 coding knowledge but was hoping that perhaps one of the brilliant minds on here might be able to figure out how to get it working with funscripts.

All that said I recommend everyone with a big collection download both xbvr and stash. Xbvr already works with funscripts and has a better UI than the SLR site in my opinion (+ it works for non SLR scenes) and stash is just a much nicer way to browse your collection and decide what you want to watch.

I run my own funscript library but atm without player integration.

Have a look at https://scriptaxis.com/ a project from @defucilis without a player but he also work on https://funscript.io/ so maybe the future will bring us those two projects together.

I already use ScriptAxis and think it’s going to be great once it’s finished but even if he integrates funscripts it still won’t work for paid scripts (or at least it’s a very long way off) or videos that aren’t available through a free streaming site.

The great thing about XBVR is that I can browse through my entire collection of free & paid content all in one place. It’s hosted locally so there’s no worry of security vulnerabilities enabling piracy like there would be if ScriptAxis were to enable playback of paid scripts.

A video is worth a thousand words
http://imgur.com/a/PAyooc5

Hey how do you get XBVR to actually play scripts in DEO?

Have scripts in same folder with same names as video EG (video1.mp4 & video1.funscript)
I can turn on Handy Integration when on sexlikereal.com in settings, but if I then go to local host to access XBVR DEO interface nothing happens?

You don’t go to localhost for playback you go to the IP address of the machine running deovr. So for me it’s http://192.168.1.2:9999. Localhost is just used for accessing the webui from the computer/Nas running it

The funscripts also don’t really need to be in the same folder as the videos although that won’t do any harm.

The method I’m about to tell you will make everything work on the current release build of xbvr. The development beta build adds a feature that allows you to download a zip with the correct funscript file names directly to your headset’s interactive folder so I wouldn’t recommend you spend ages manually renaming all your funscripts.

If I want to play Adriana Chechik - Cock-Tail then I leave the video file’s name untouched and xbvr should automatically recognise and match it. 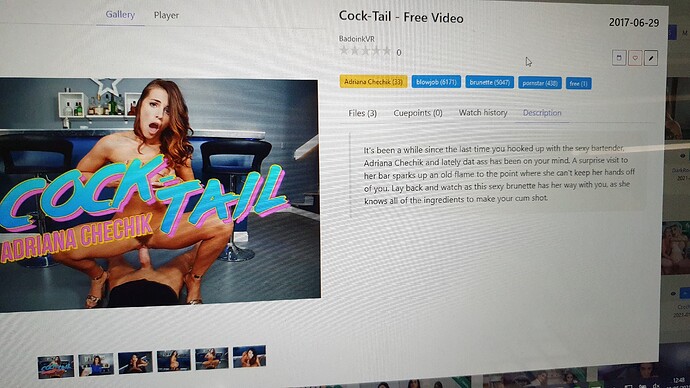 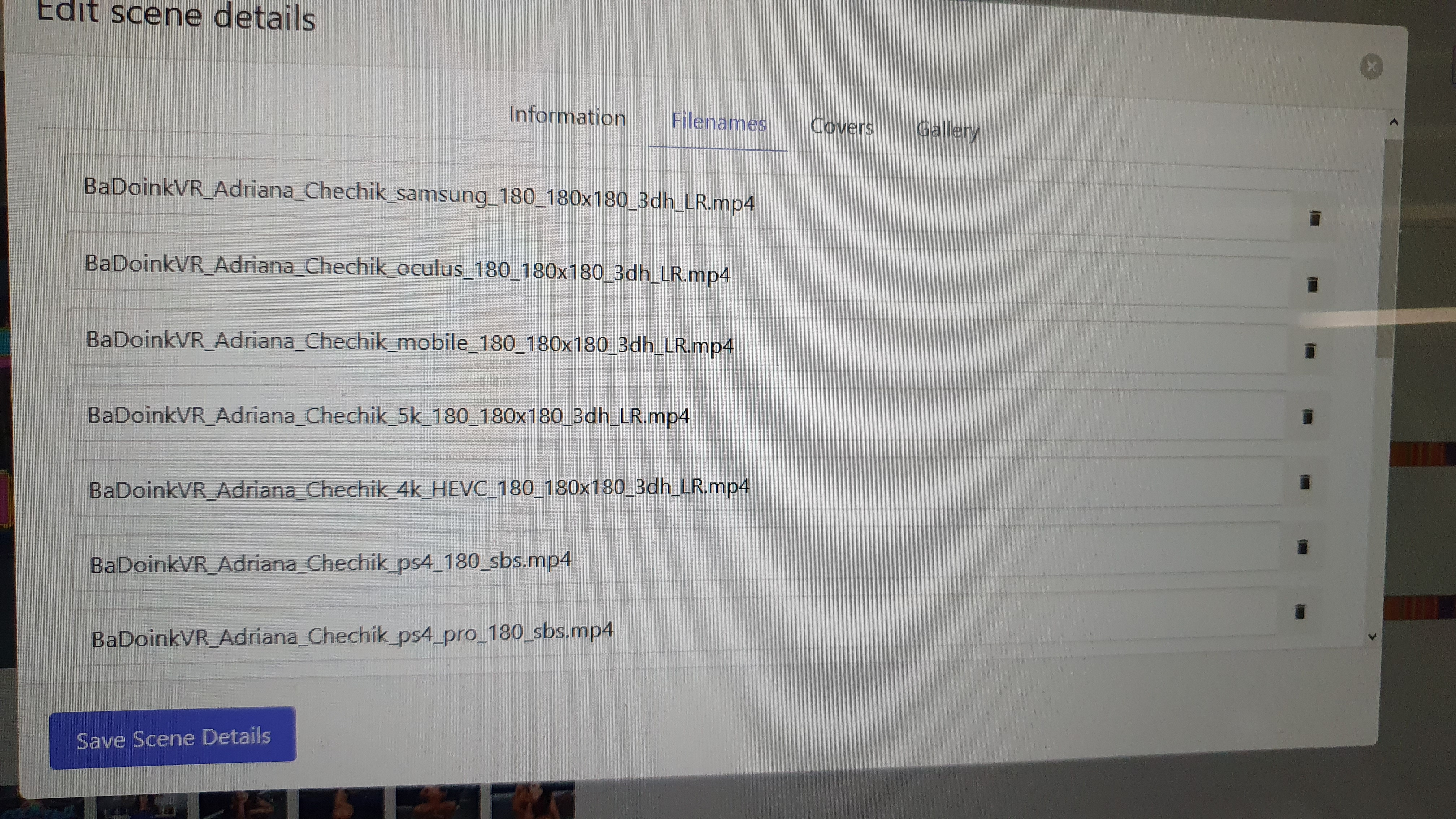 I then need to rename the funscript in my interactive folder to match the scene’s title in XBVR: Cock-Tail - Free Video.funscript

Optionally I can also match the funscript to the scene in XBVR for automatic heatmap generation and mass downloading of a zip with all the correct funscript file names (this is in the next build and doesn’t require renaming at all, just matching using whatever file names you want). I can do this either using XBVR’s matching feature by clicking on Files in the top left of the web UI (accessed from a computer/phone browser instead of deovr) then match. 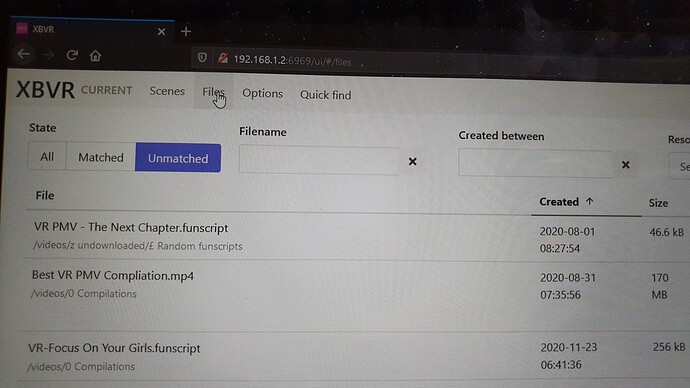 Or by editing the scene from the xbvr web UI and adding my funscripts file title (Cock-Tail - Free Video.funscript) to the list of known file names. (Using the matching tool is quicker and easier in my opinion) 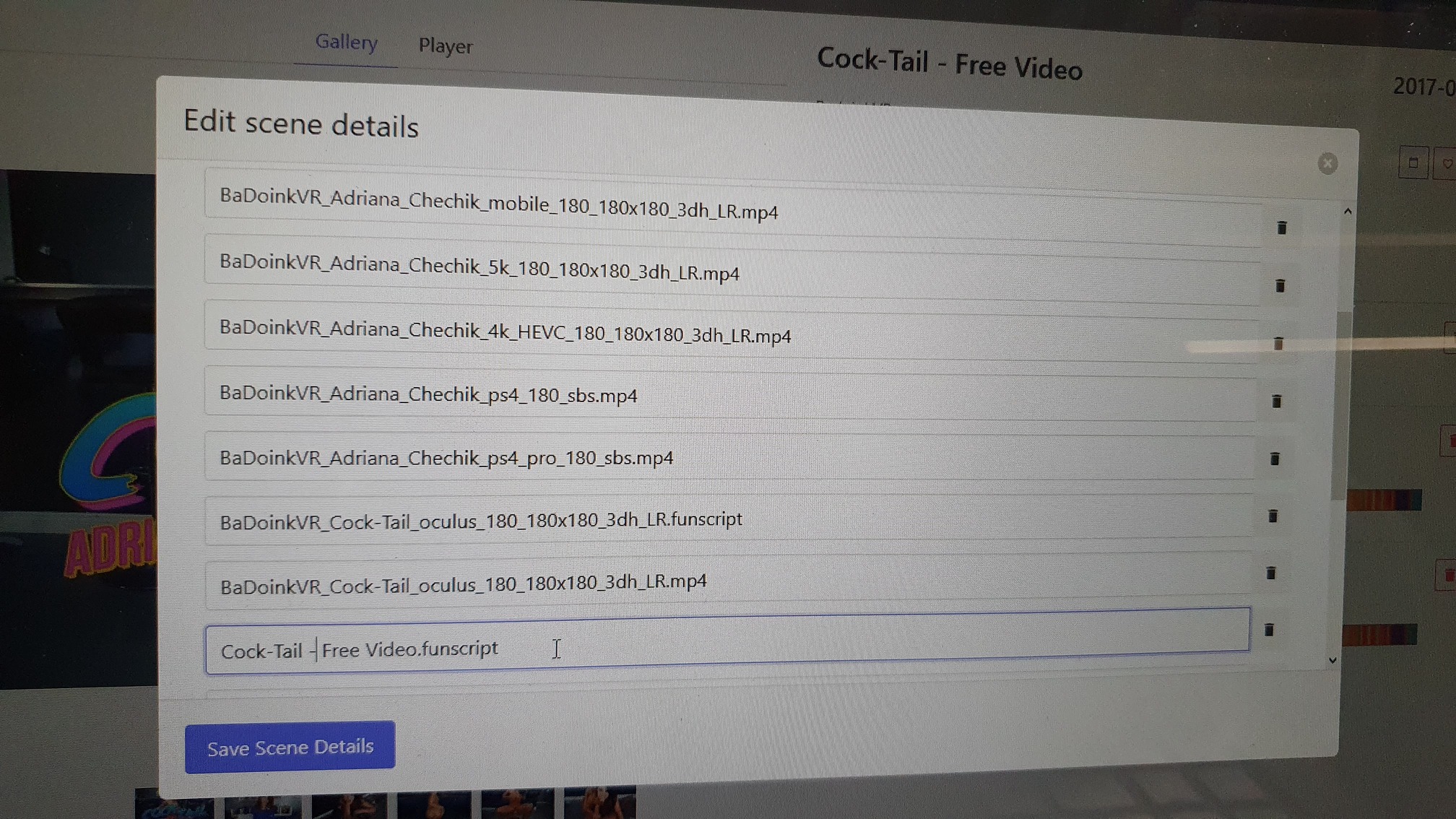 Then when I play it through the xbvr player interface on deovr it should recognise the funscript and send it to the handy.

The development build has made this much simpler. Xbvr’s matching tool is usually able to match funscripts to scenes using the original eroscripts filename so it’s just a case of clicking match on all of them (it occasionally makes a mistake so human verification is required for funscript matching). You can then go to the funscripts tab in options (while on your headset) and export all matched funscripts to your interactive folder with filenames that will work for xbvr/deovr. 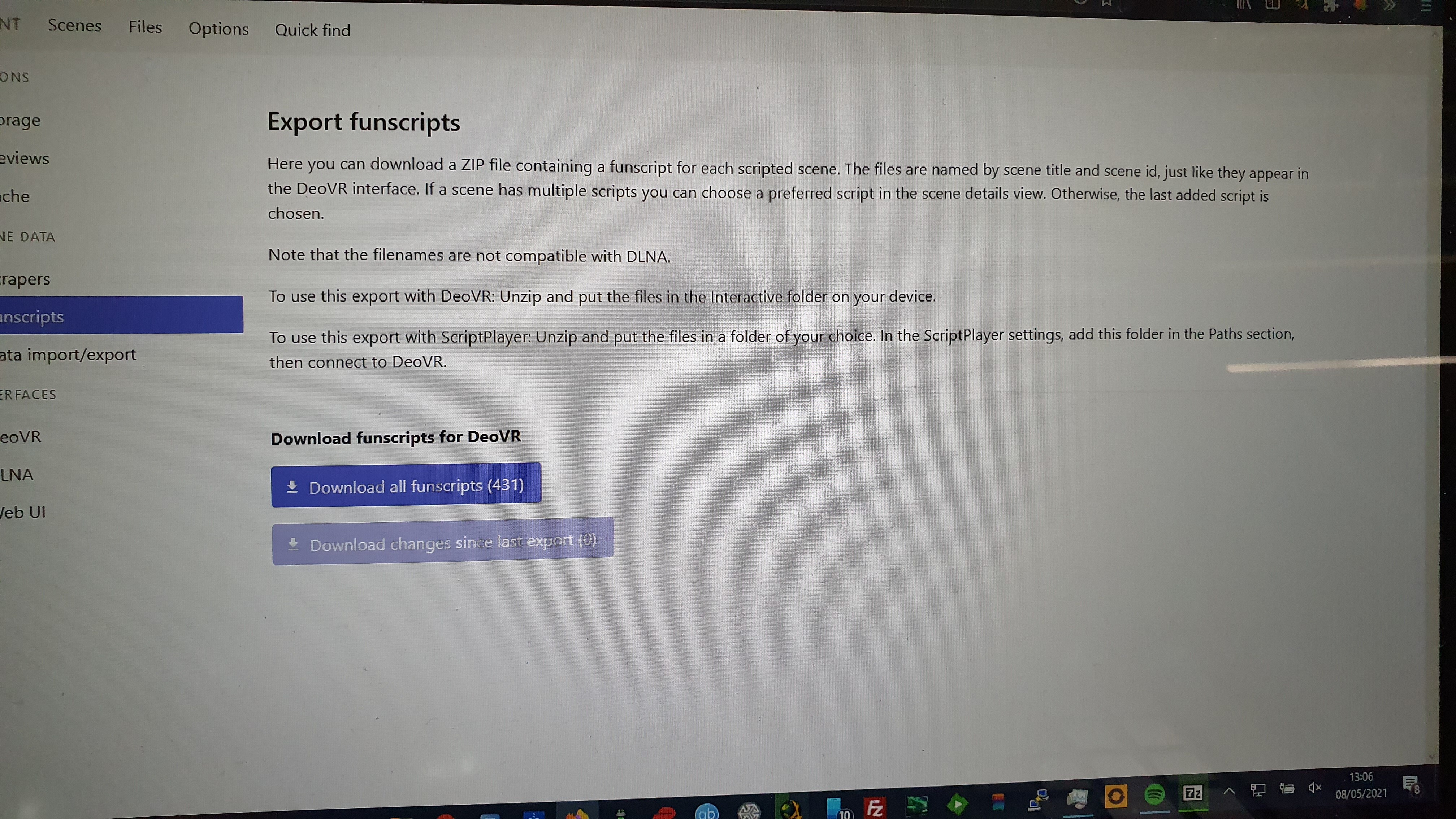 Tried this out last night but wasn’t able to get anything working.

Going to try resetting database and matching a single script + vid.
Is the dev build invite only or can I build it myself?

I don’t have anything to say about these organizers themselves, but thought I’d add that using symbolic links is an easy way to make sure videos and their scripts are in the same directory, without making copies of either. You can have a single directory for storing videos and just make symbolic links pointing to those videos elsewhere, or you can do the same for scripts. Or both.

Are you able to get a video playing in deovr using xbvr at all?

If so you can stop messing with xbvr entirely and just change script (stored in the Interactive folder of your vr headset) filenames to match xbvr scene titles.

The version I use is available here the only reason I don’t outright recommend it is that it tends to crash more whenever performing tasks (scan/scrape/preview generation) so I’d deffo recommend backing up the whole config folder pretty regularly.

@Thanny that’s a really helpful tip, I’ll do some research then decide whether it’s worth trying to reorganise the huge mess that is my VR folder. Recently I’ve just been dumping videos + scripts with 0 organisation and letting xbvr sort through things but it’ll be a massive pain to organise if I ever want to transition away from xbvr/mass deletions (you can delete files one at a time using XBVR)

Yeh can play my XBVR full library in DeoVR, just doesn’t seem to have the script toggle on the UI during playback.

What I’ve been doing is going to SLR first, clicking Settings then making sure my Handy is connected.
Then loading up XBVR via my IP Address:Port Number.
Going to the interactive tab loads a tonne of videos, but clicking the video doesn’t trigger the “Sending Script to Handy” like usual

If I load up SLR and then go to local videos I can play them back that way.

Guessing there isn’t a way to have two sites open in DeoVR?

If I load up SLR and then go to local videos I can play them back that way.

If local videos are working then guess is that you’re renaming the funscript files wrong.

The funscript doesn’t need to be the same name as the video file but as the video’s title in XBVR. So “example_LR180x180.mp4” would require a funscript called “example.funscript”

That shouldn’t be necessary

Could you perhaps send some screenshots with examples of funscript file names and the corresponding xbvr scene titles? 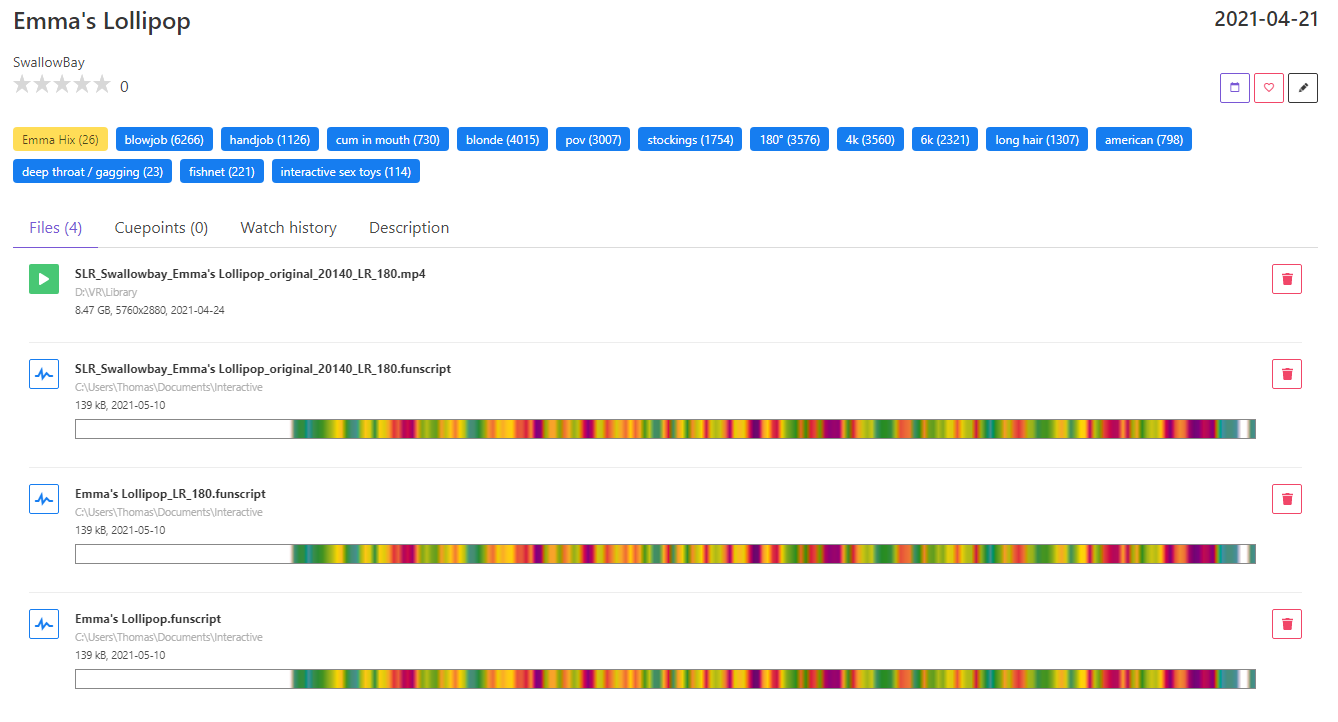 I see you’ve got it saved to an interactive folder on your windows pc. Maybe try copying the interactive folder into the headset’s root directory (I don’t use occulus link so am not sure if that will work for you but its the only thing I can think of at this point.

@scottishsimp = Try taking out the apostrophe = ’

If you are using the “export funscripts” function of XBVR, you don’t need to futz with the file naming – it will name them exactly what they need to be in order to work (It is based on the XBVR scene ID and the “Human readable” scene name).

Note that you still have to load the scripts into a folder named “Interactive” at the top level of the filesystem of the headset.

Edit: Apologies for the thread resurrection, did not notice the time gap until after posting.

Is the stash app only working with vr videos? I managed to view my VR videos with the right directory, but I can’t seem to make it work with my 2d videos. Same format in mp4 for both.

That’s very strange, I only use stash for 2d videos. Maybe head over to the stash discord to troubleshoot