Now, after some discussion, we were stuck on the question if there are any “dedicated” options or script players that work with VR Videos out of the box.
Mind that we’re talking Stereo Video to standard 2D here, so basically what YouTube does to VR or 360 Videos, where you have some basic dragging navigation on your monitor.

We searched around and only found some more or less hacky tutorials in converting the video playback to an acceptable level.

Is there anything we’re missing?

[The reason we are asking is because, if the answer is no, we will put in some additional work into implementing it. But as VR Funscript Videos don’t seem “tooo popular” at the moment, we thought asking beforehand wouldn’t hurt.]

Thanks for any kind of help

it would be awesome to get be able to run VR on a regular monitor.

I wouldn’t say it’s not hackish, so you might have already found those, but there’s a mpv plugin to play VR videos in 2D: GitHub - dfaker/VR-reversal: VR-Reversal - Player for conversion of 3D video to 2D with optional saving of head tracking data and rendering out of 2D copies.
And there’s a wrapper to use mpv with the Handy: Handy-mpv [ Linux player ]

I’ve used both (and they work fine) but never at the same time. I imagine it’s doable but you’d probably have to modify the wrapper to pass the correct info for the plugin to mpv.

I personally use Whirligig in conjunction with ScriptPlayer. Dunno whether that count as dedicated… 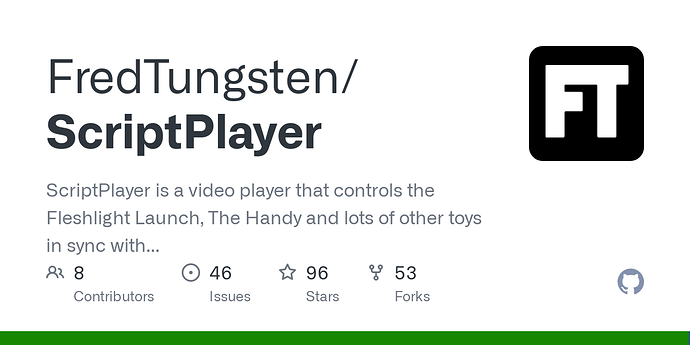 ScriptPlayer is a video player that controls the Fleshlight Launch, The Handy and lots of other toys in sync with videos. - Whirligig · FredTungsten/ScriptPlayer Wiki

@Falafel While that does look a bit more simple, it seems getting around using two pieces of software at the moment isn’t possible.

Looks like putting some time into it, would definitely be useful. Thanks for the quick responses

Would definitely do! Whirligig can get laggy / out of sync sometimes and switching between programmes for minor adjustments can be irritating as well. An integrated player would be a bliss to have!