Upon request from our users to make simple scripts, I started building a web tool for scripting. Some of you here have used those tools, and a couple of months ago, I scraped the old tools I had built and developed one from scratch. I mostly did the work over weekends and holidays but also spent work hours on it (making it a company property). We, Sweet Tech - the Handy team, now use the tool to review the fully automatic scripting service we are building up (more on that in a future post). To summarize, it’s mostly an off-work product that I have done for fun, the challenge, and to give to the community.

Since it is pretty new, it might be some bugs here and there. I offer no support and do not get mad if I’m slow to reply and fix the bugs. General bug fixing: settings->data->delete all data and refresh;-)

Feel free to make FREE scripts with this tool. Not for commercial use!
Link: Handy simple scripter

Some of the features:

Some of the things that I hope to add when time (and demand):

Let me know what you guys think. I made a tutorial video (in “help” - my first EVER video → be kind<3) where I go over the current functionality. If there are new modules that you want that will help speed up the scripting process, send requests. 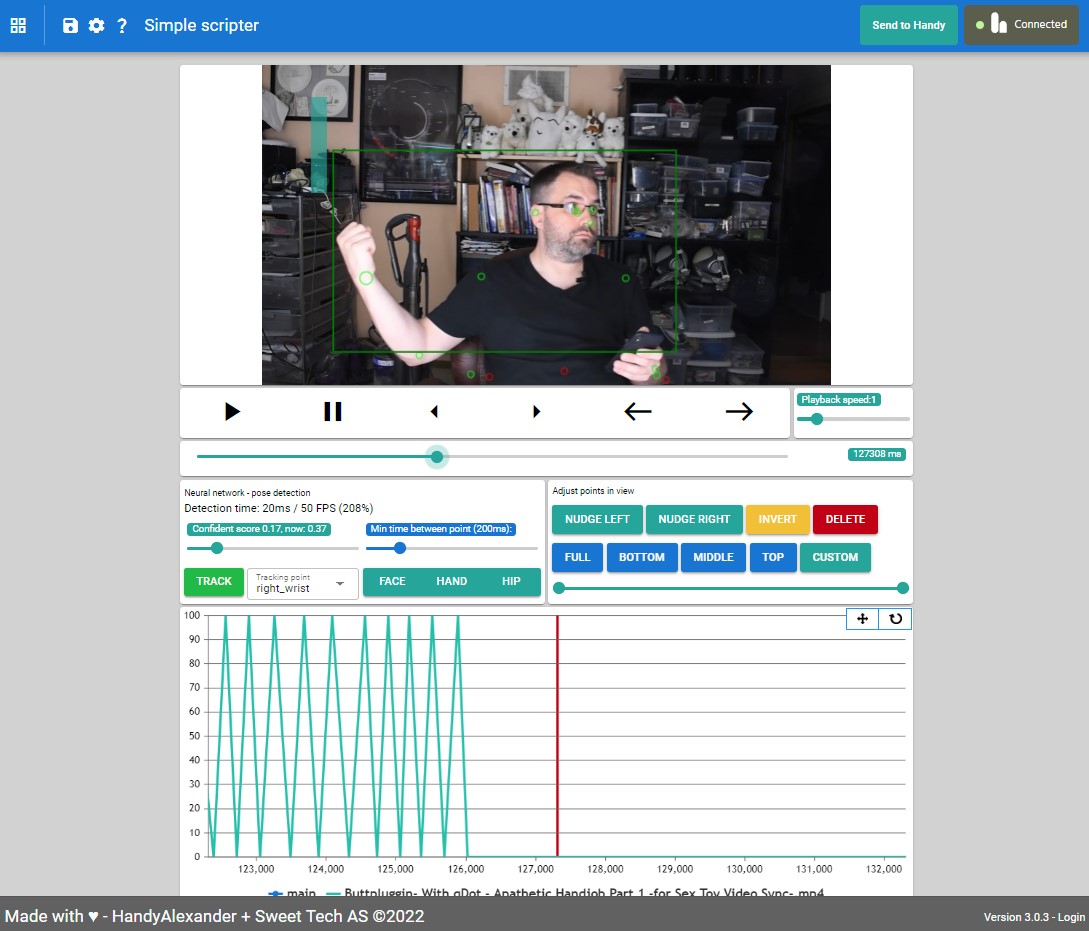 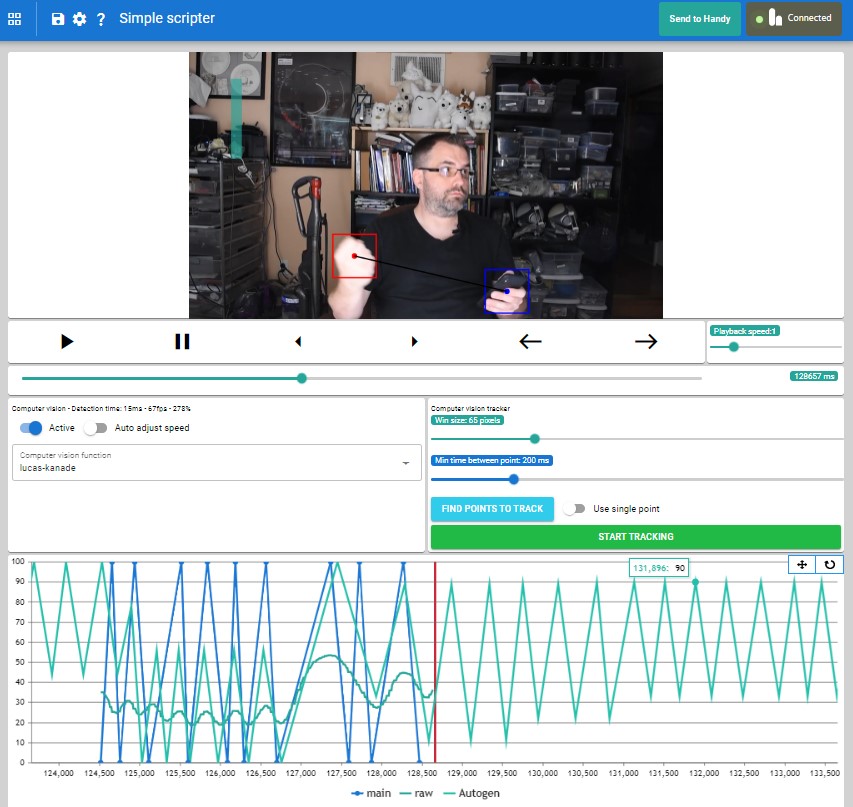 alexander. sorry to repeat this but thanks for a super nice tool. i have been playing around with it a lot and i have two questions. you probably discussed them in your video but i missed it. if I did, please point me to where it was discussed.

Great tutorial @handyAlexander. I love this tool, used its predecessor to script a lot and will keep the feature requests coming. So here it goes.

I produced this script and tried to figure out a good low-effort but high quality workflow with motion tracking.

The best I have so far is:

I think it turned out nicely without much time spent. What I would love is of course to do step 3-5 done in the web tool, and even less effort.

So (4) removing mid points of the generated graph somehow, maybe be able to set some time/angle threshold where a mid point is filtered out.

And (5) stretching the graph, exaggerating movement. Plus moving an entire graph section up/down. Or even better, setting the max/min point while doing motion tracking so the graph points will just scale accordingly. That could also solve (2) - points outside the max/min range wouldn’t be in the graph.

Let us aim for you not to have to switch between tools. Can you explain better what the “delete mid points” function does? Then I can try to add that as a math function.

Step 5. Are there any functions missing in the simple scripter that you need to do for this step?

Can you explain better what the “delete mid points” function does? Then I can try to add that as a math function.

A mid point in OFS is a point is situated between the previous and next point on the Y-axis. A point that is not a peak.

The motion tracking will generate a lot of unnecessary mid points and I can get rid of some by using Downsample but doing it too much will lose accuracy.

Step 5. Are there any functions missing in the simple scripter that you need to do for this step?

The adjust points in view component could be extended to nudge all points up/down by +10/-10. And nudge top/bottom points only by +10/-10.

Let me know if the changes are as you expected.

Great additions. Merge mid points looks fantastic, works better to merge the mid points than just delete them like I did in OFS. Nudge up/down is also super useful.

Much better than before! Not sure about average though, it decreases the movements and ruined some parts of the script I tried generating.

Perfect:-) I will add average settings after my holidays. Then you can set the average length to 1 to disable that.

Is there any way to identify if there are areas in the script that would be too fast for the Handy? 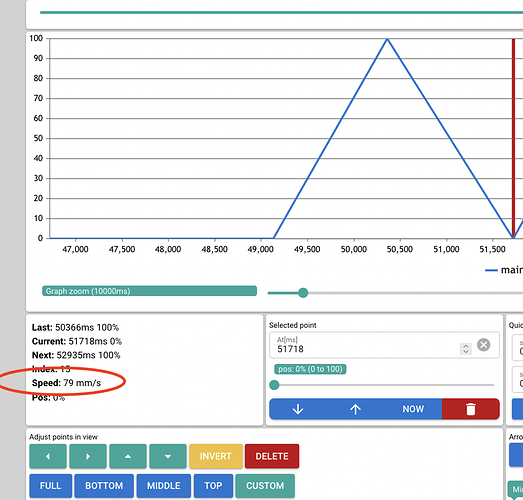 The map is based on the stroke length set in settings->handy. Default is set to 96mm (max stroke length). If you have a shorter stroke length, you can have less space between the points since the motion is slower.

Yeah I was thinking of it, and replacing that old outdated tutorial I did. But as the Simple scripter tool evolves though, maybe it’s better to wait until I can do a tutorial in that tool.

The step I need to do in OFS right now is selecting and moving top points up and the bottom points down for different sections of the script, to exaggerate movement.

A scale/expand/stretch graph section feature in the simple scripter would be even better.

could you describe how you want the “scale/expand/stretch graph section” to be like? Then I can try to make it for you.

There is a component called “adjust points in view”. Have you tried that one? 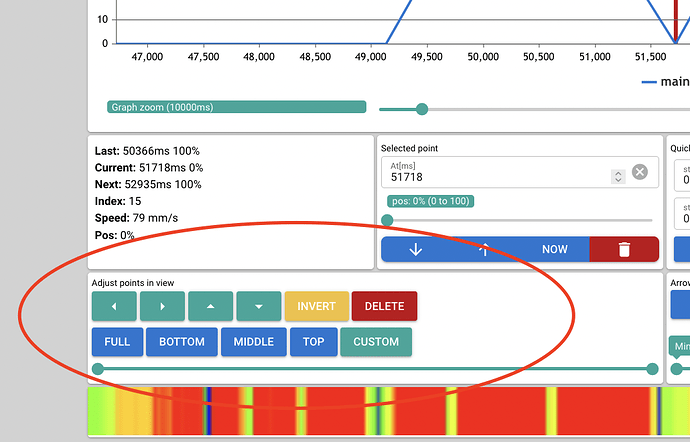 This is an example of a motion tracking generated graph:

The up/down movement is much smaller than in the vid but I don’t want to press MIDDLE for example because I want to keep the variety of the movement to reflect the vid.

The graph after I have moved top points up and bottom points down to scale it using OFS:

In this particular case top points were moved +20 and bottom points -10 for the script to match the vid. In other sections of the script I might need different values since the camera might have zoomed out, different camera angle etc.

So you could add adjust top points up and bottom points down by 5 to adjust points in view. Not sure about the mid points, maybe they could be scaled proportionally, up if closer to top or down if close to bottom point.

Got it, thanks. Will give it a try and see if I can add that to “adjust points in view”.

I think I have added what you want. Now you can click on “all” to toggle between all, bottom, top . For example, if you select top and nudge up, you will only move the top points up 5%. The middle points will be moved relative to the change.

Middle points (points between a top and bottom point) keep their relative position. This goes to the conversion of the points and nudging in Y-axis.

Now with these amazing updates, I have also updated this tutorial on how to use the motion tracking.