The latest beta version of ScriptPlayer contains a small command line interface that allows you to control an already running instance of ScriptPlayer.

ScriptPlayer Beta Features (and how to get them) Software

Since the last public release (1.1.0 on 2020-01-18), the ScriptPlayer betas versions have gained a couple of features. I’ll try to maintain this list between releases in case any of you have been waiting for some of that. Here is a small tutorial on how to get the most up-to-date build of ScriptPlayer (full installer, no tech-knowledge required): How to download ScriptPlayer Beta Versions Please keep in mind that some of these features are experimental New heatmap that displays the approxim…

Why would I want to use that?
With this new feature you can control ScriptPlayer from another program, custom input device or whatever.
E.g. you could control SP from your programmable keyboard keys, stream deck, selfmade arduino input device, build a custom webinterface or alexa skill etc.

Which commands are available?
Currently most of the commands that are available are the ones that you can find in the “Input Mappings” settings. You will need the “Command ID” which will show up in a tooltip when you hover a row (right click on a command to copy it to your clipboard) 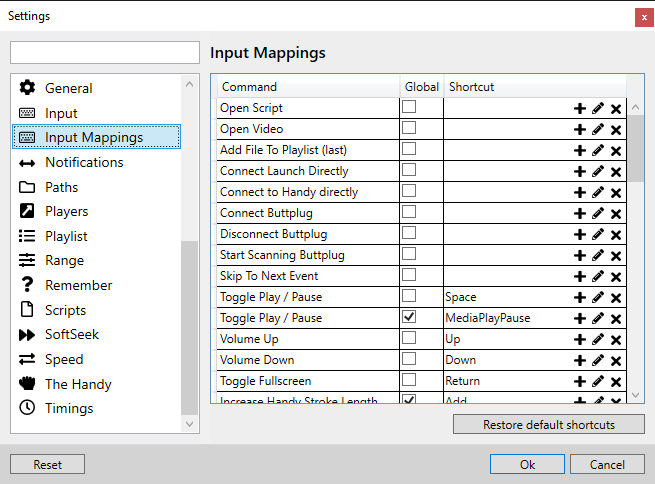 All others will be documented here when I add them.

How do I use it?
The latest beta version contains two programs called “spcli.exe” (Script Player Command Line Interface) and “spcon” (ScriptPlayer Console). These two programs are mostly identical, I’ll highlight the differences a bit later. You can start the programs with the parameters -c <CommandId> to execute a single command. If ScriptPlayer is already running, it will execute the command. To start an interactive session and send multiple commands, simply start the program with -i.

spcli will run “invisible” and will not create a console window. If you do not specify -c or -i it will assume the single command mode -c by default.

spcon will start a new console or use the existing one (e.g. when started from the windows command line) and assume the interactive mode -i by default.

You can run both programs in both modes, but spcli is meant for single commands and spcon for interactive mode.

If you want to toggle playback for example:

or in interactive mode

How does it work?
spcli.exe and spcon are tiny little programs that take every argument you give it (except for -h and -c) and pass it on to ScriptPlayer via local named pipes. If ScriptPlayer is not running, nothing will happen.

What’s next?
If you have any suggestions, feedback or would like to see certain commands added, let me know.

Woah! That’s a super cool feature! I was thinking about building my own little Pi based e-stim player, and this is precisely what I was missing!

pretty dope. this will be useful for automating some stuff with python scripts.

If you would add a “seek” command where you can pass a timestamp or a relative position as well as a command to hot reload the funscript, I could write a little Lua extension for OFS to enable live testing through ScriptPlayer.

Not sure if there’s demand for such a thing.

Still could be interesting.

Not sure if there’s demand for such a thing.

Hey, just a quick heads up. Seems like command for connecting the handy is misspelled. It’s “ConenctHandyDirectly” currently.

Thanks, I’ll fix that

A couple of new commands in the new version:
(btw. spcli always returns “OK”, that’s not done yet)

Seeks to a timestamp (anything from mm:ss to hh:mm:ss.fff) or simply a number in ms.
If you put a + or - in front of it, it will seek relative of the current timestamp.

Oh, this is perfect!

Everything I do is voice automated and I had to figure out a janky macro to send mouse/kb commands in order to have scriptplayer connect to the launch. A command interface is a much better solution for automation. Thank you for doing this!

Is direct launch connect/disconnect one of the supported commands?

Is direct launch connect/disconnect one of the supported commands?

Connect - Yes, disconnect - No (can’t disconnect BLE with the windows API, no idea why …

That’s fine, I can always restart scriptplayer via command line instead. Thanks again!

This could be pretty cool for automating Fap Land, though we’d need scripts for all 100 scenes.

This could be pretty cool for automating Fap Land

Since I couldn’t get all use-cases working with a simple command switch, I’ve added a second program spcon.

spcli and spcon are mostly identical, but spcli will not launch a visible console anymore and spcon can be used for interactive sessions.

ScriptPlayer will now send slightly better feedback than just “OK” by waiting for the command to be processed.
(Not neccessarily finished executing, e.g. when loading files, but at least you know the command was received and the syntax was correct)
If the command isn’t processed within 2 seconds, you will receive a “FAIL:Timeout”.

100 rounds that you randomly traverse though with a dice until you get to the end, not sure if it’s just a 4chan thing but all of their Fap Hero threads have it in the info.

Webm.red is a simple service for uploading, hosting, and sharing webm videos

Going to need to do another OFS release though before I can release this because I had to add some functionality to the Lua api, like funscript saving to facilitate this.

btw. there is a built-in “Auto Reload” debug option in ScriptPlayer that reloads the script whenever the file is changed:

If you get this working on a Pi or another linux device, please make a post about it.