Hey guys, since 2 of you already showed some interest - i gonna do a small Tutorial to mod the Kiiro Keon to work with the power supply socket in your home.

before i start, please excuse me when something is written in bad grammar or overall bad english - its not my nativ language. sry xD

first of all, you should have some kind of expierence in soldering. ( dont be afraid its very easy)
you should have some spatchler or old bank card to get the keon open without breaking the plastic clips.
Some screwdriver and a cable cutter would come in handy aswell - but they are not needet.
I gonna link what i bought for the Mod - for better understanding.

[size=2]* The default Battery is working with 14.8v and runs about 1,6A max - first i thought of getting a battery with more Ah but the chargingport is trash, and since the pcb is between the battery and the charging port there is no way a battery with much more Ah would charge in less than a day.[/size]*

Step.1
find the gap where the outer shell is seated, and go around with the spatchler - a flathead-screwdriver will help to get the spatchler first in. Be careful to not break the pins - go near them and pot some outward presser next to them *pic2 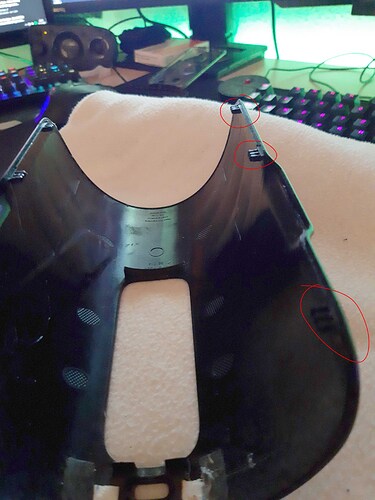 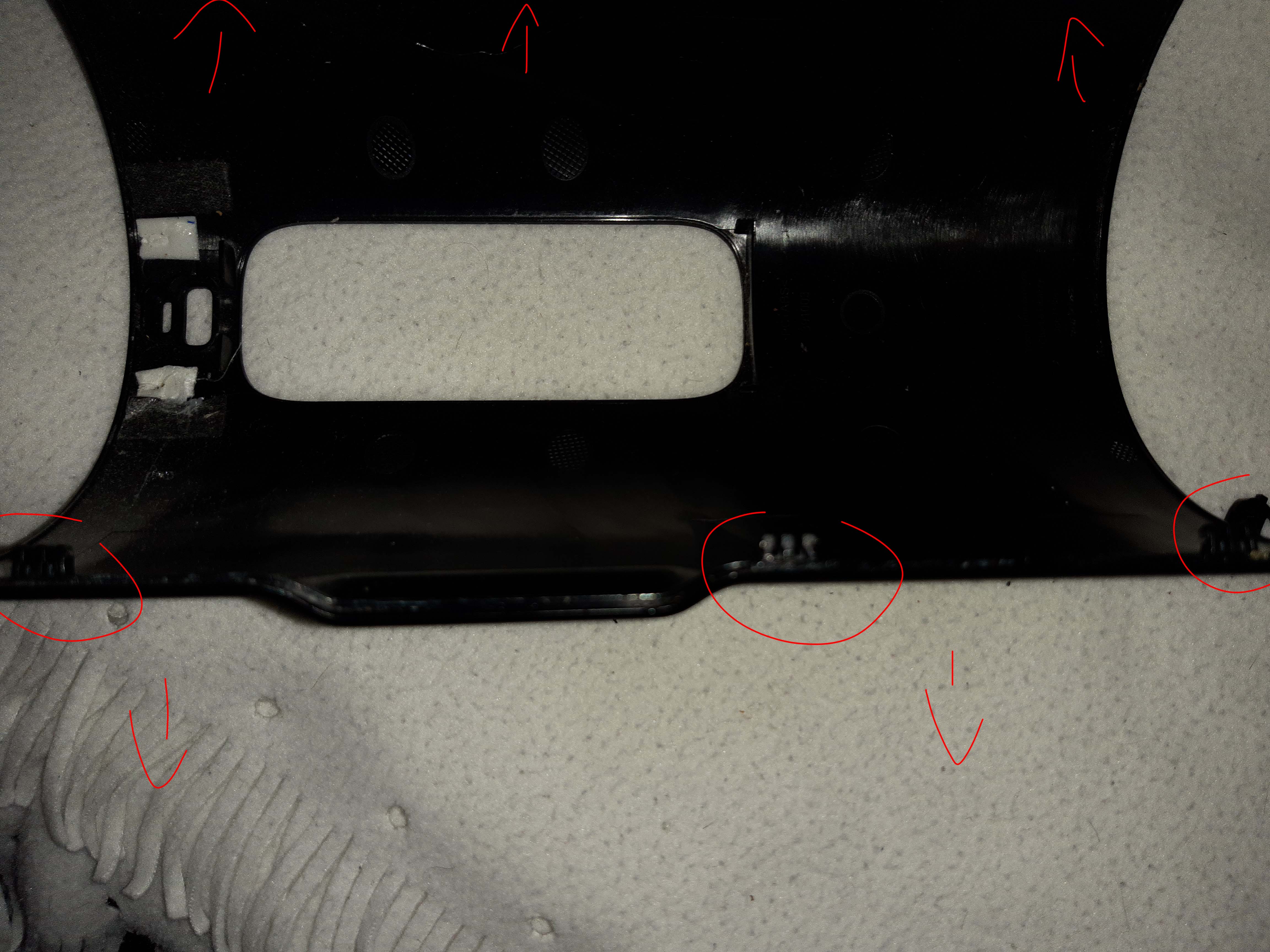 Careful to not loose your buttons 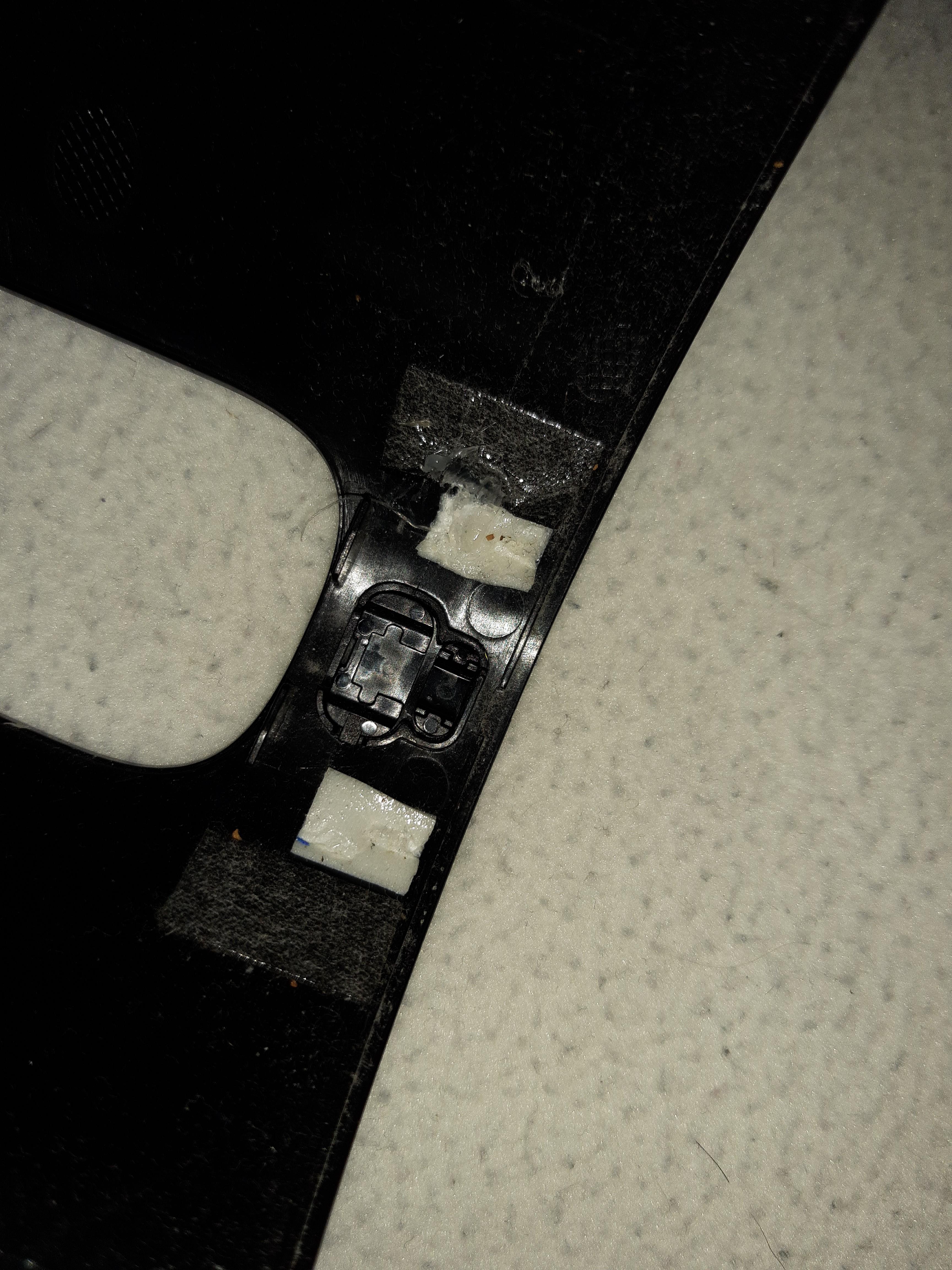 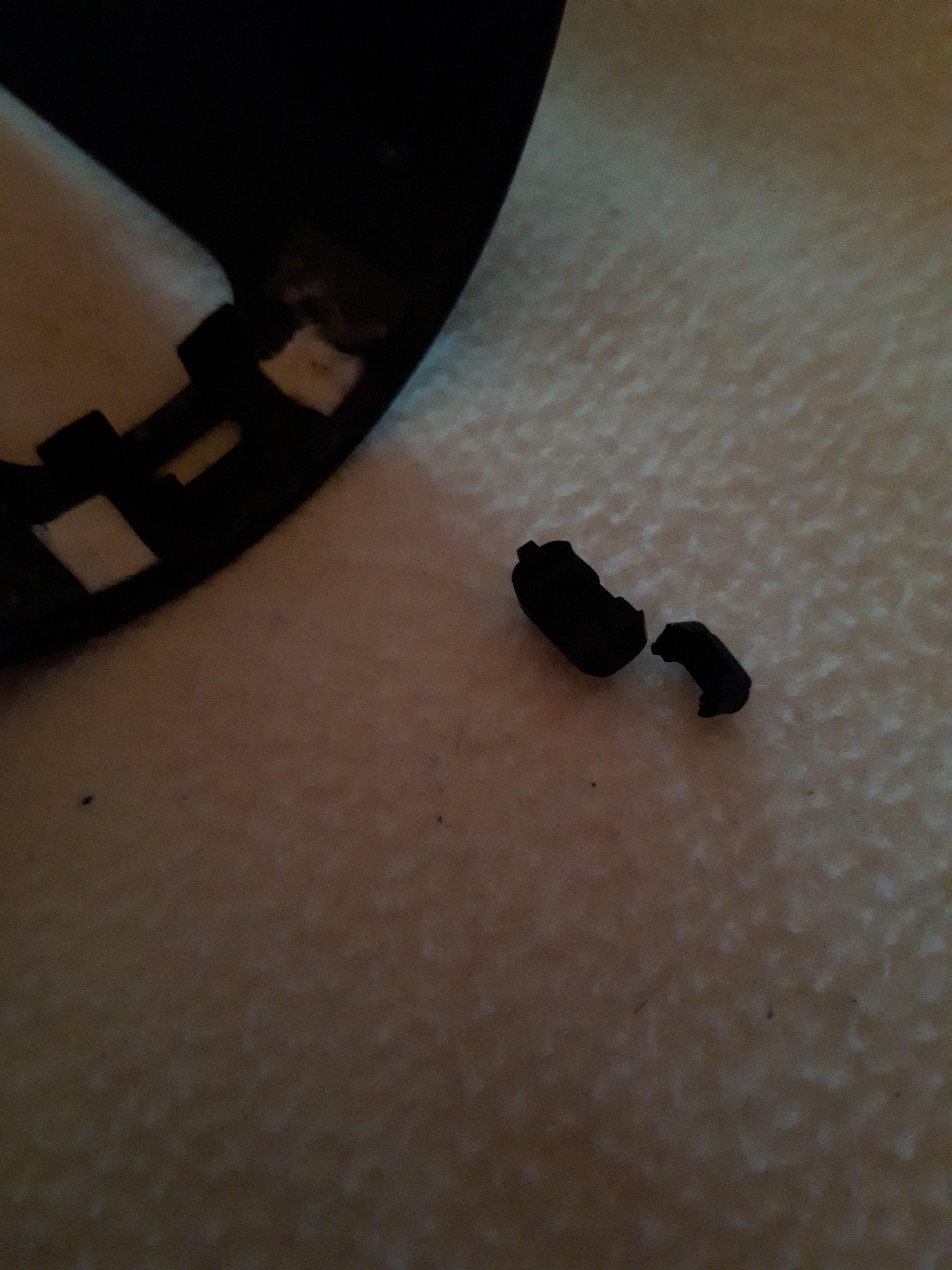 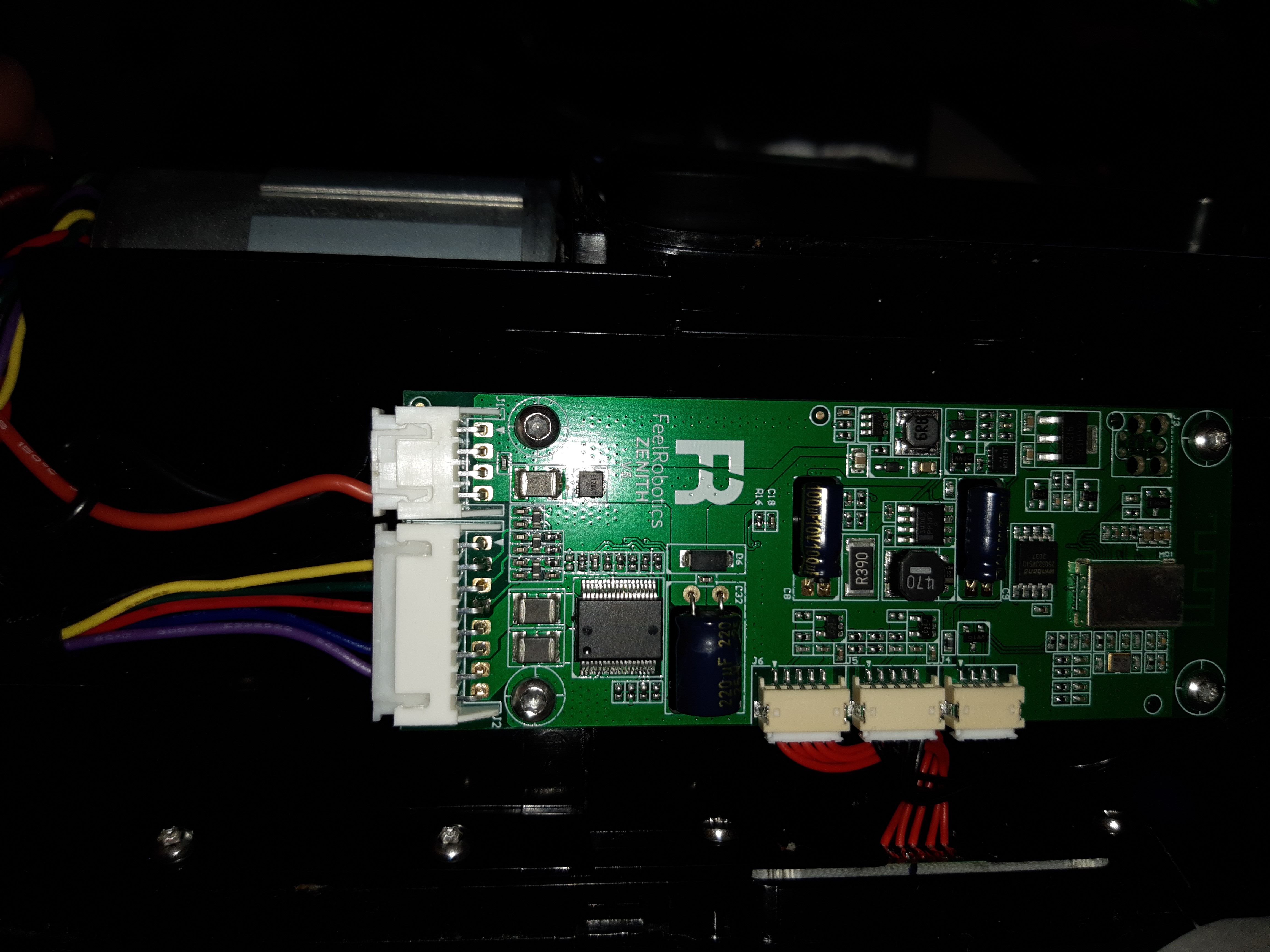 Find the site where the Battery is Seated. Follow the Battery Cable to the other site, and for savety disconnect the upper connector.

and then cut the cords one after another,Dont CUT both at the Same time - and never let the cutted cords touch each other and secure the Battery with electric tape or shrink tubing. 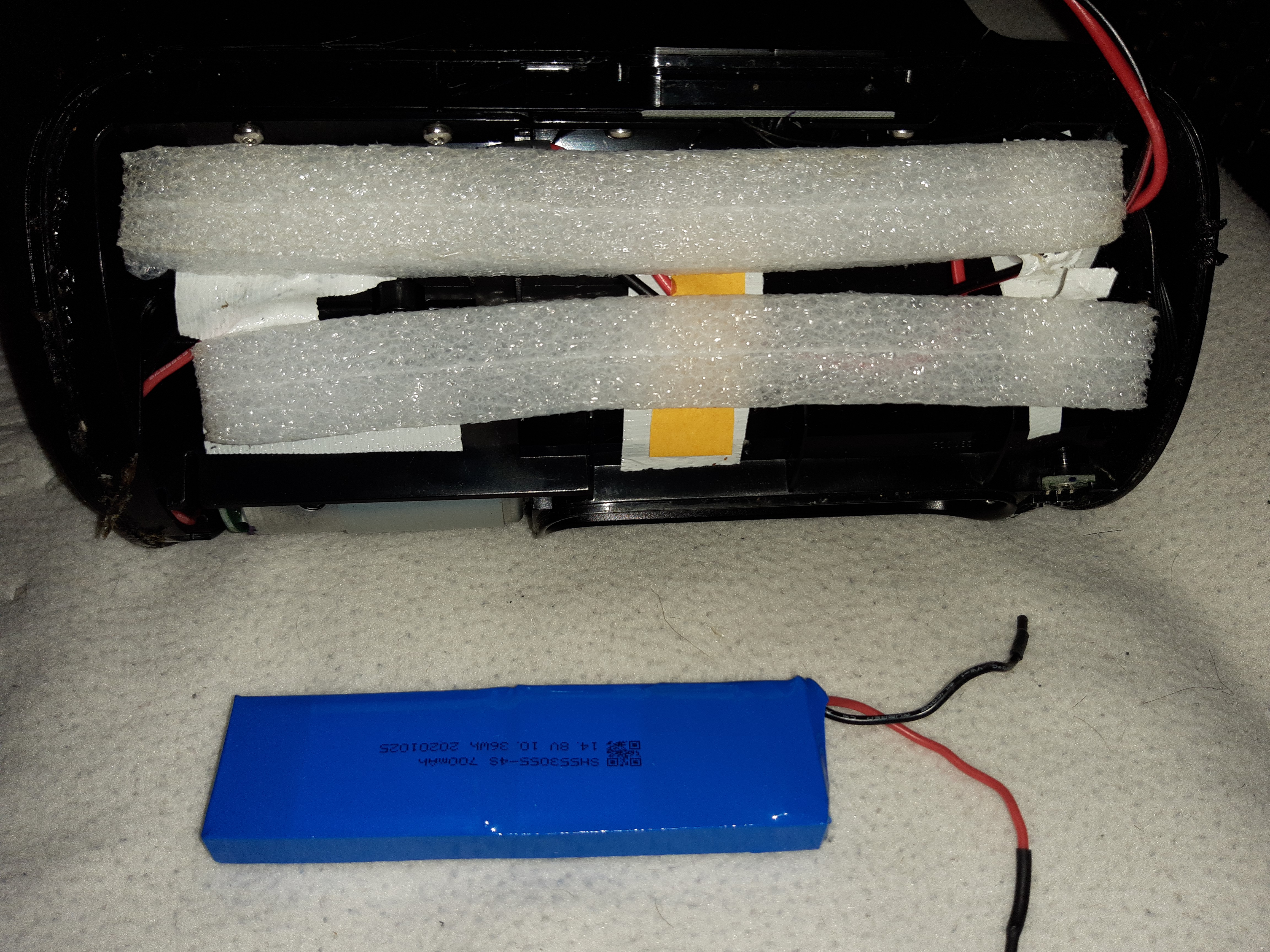 Step.2.1
Cut the male site of the Extension cord. (pos 2 in the Itemlist)
since you cutted already the Battery - you could remove the the “Batterycable with the Connector” completly for easier soldering. But thats not really needet because we only need to solder 2 wires.

Step.2.2
When you bought Shrink tubing, put some over the cable but push it away from the point where to solder - then remove the insulation from both cables, solder them, put the shrink tubing over it again and heat the shrinktubing with a lighter (or heatgun) 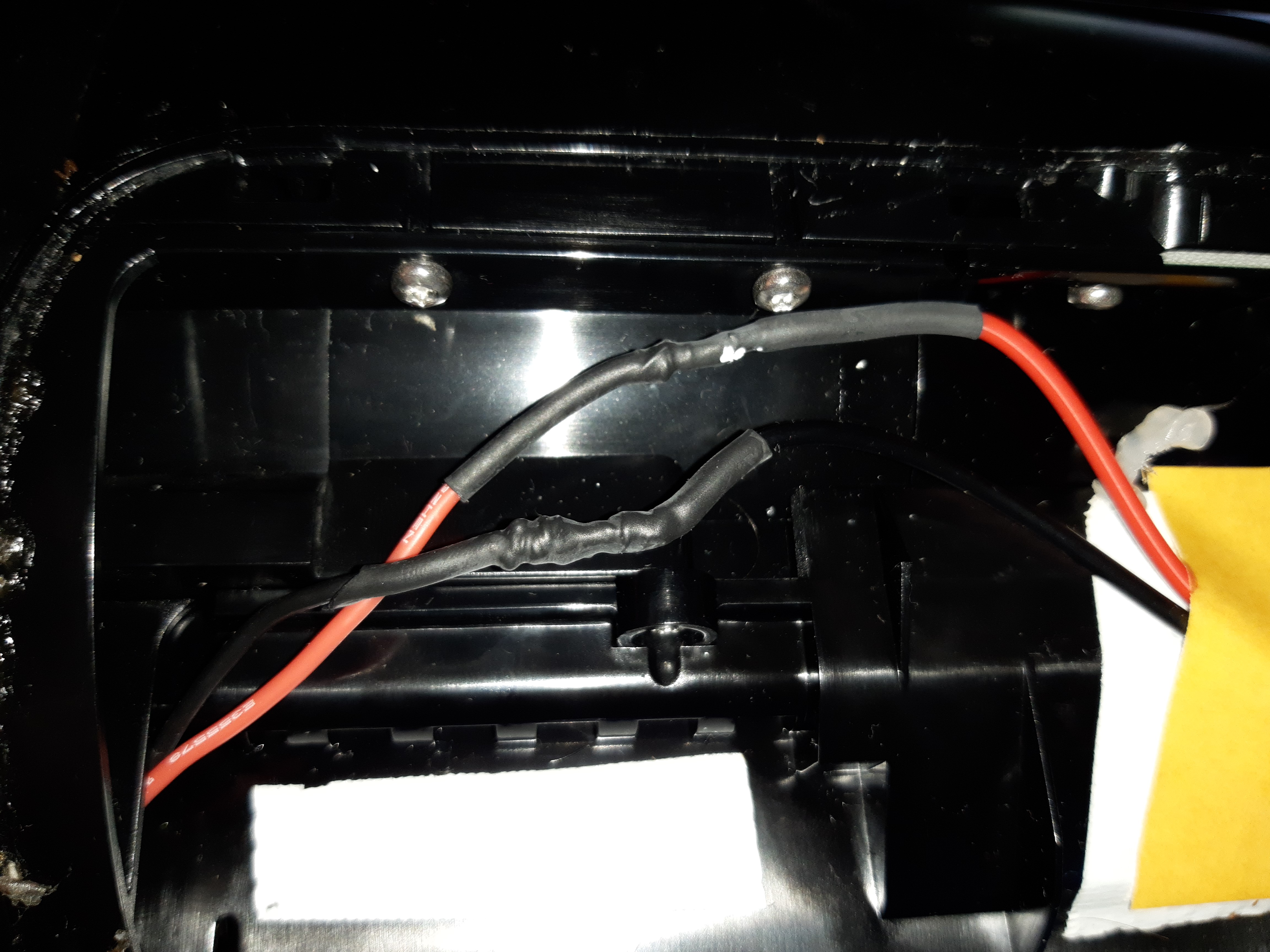 If you disconnected the white connector, put it back in. Connect your cable to your Power Adapter and try to Start the Keon. It should start normally! less than 15v will result in a short flashing red light.

I used my Soldering Iron to melt a little bit of the plastic for my Cable to go through, right at the edge where the case is closing 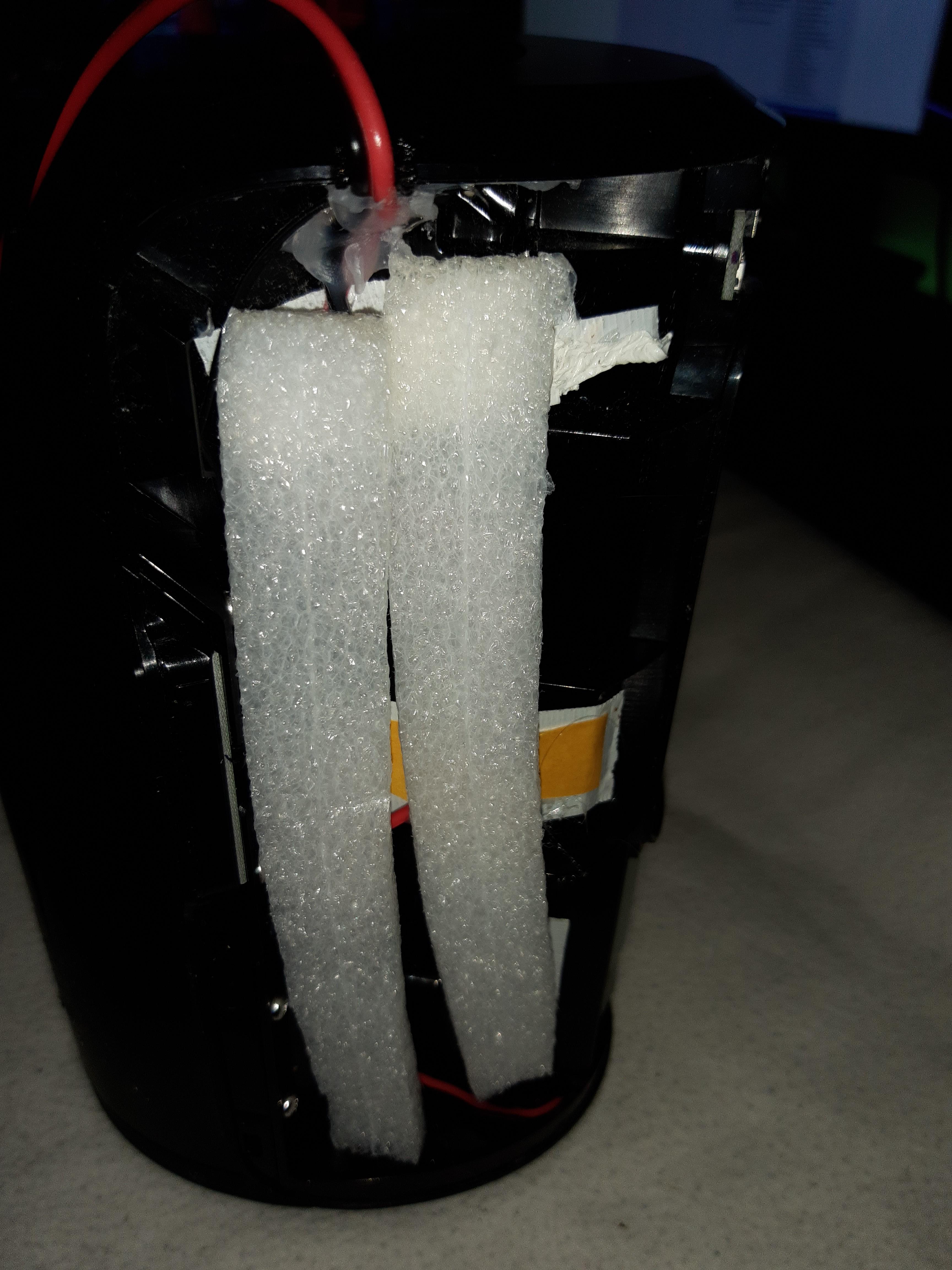 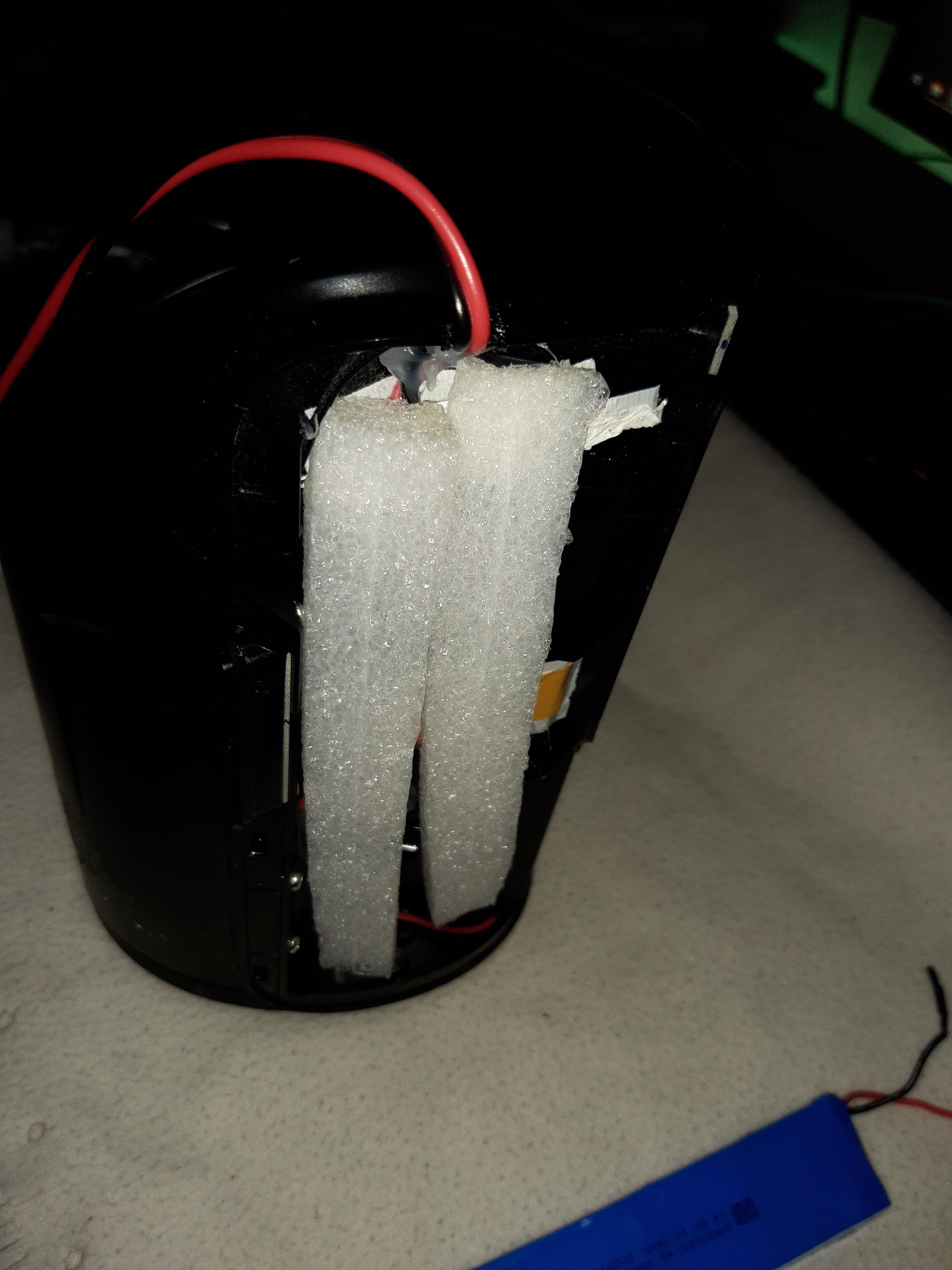 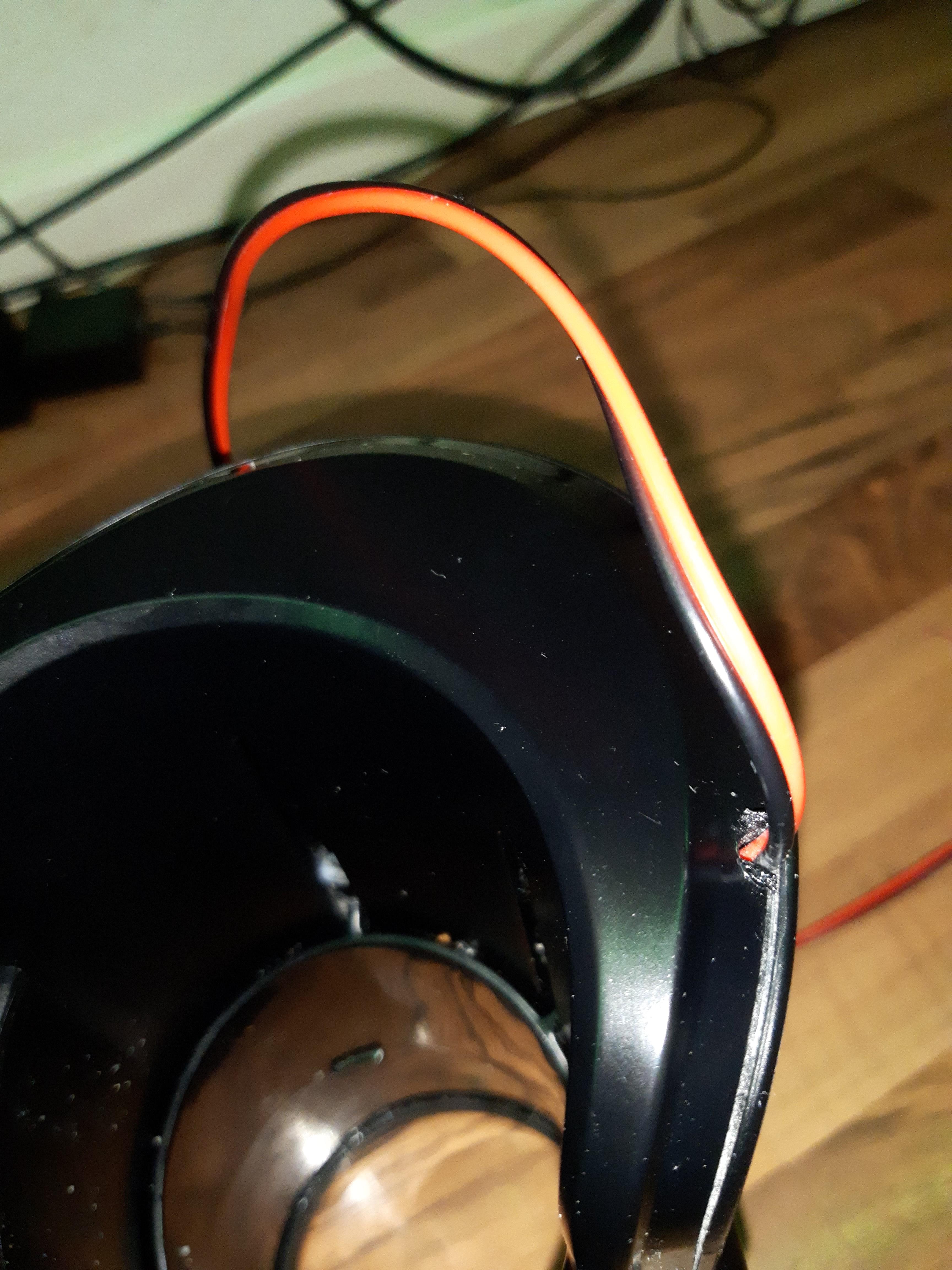 Then i used some Hot glue to hold it in place 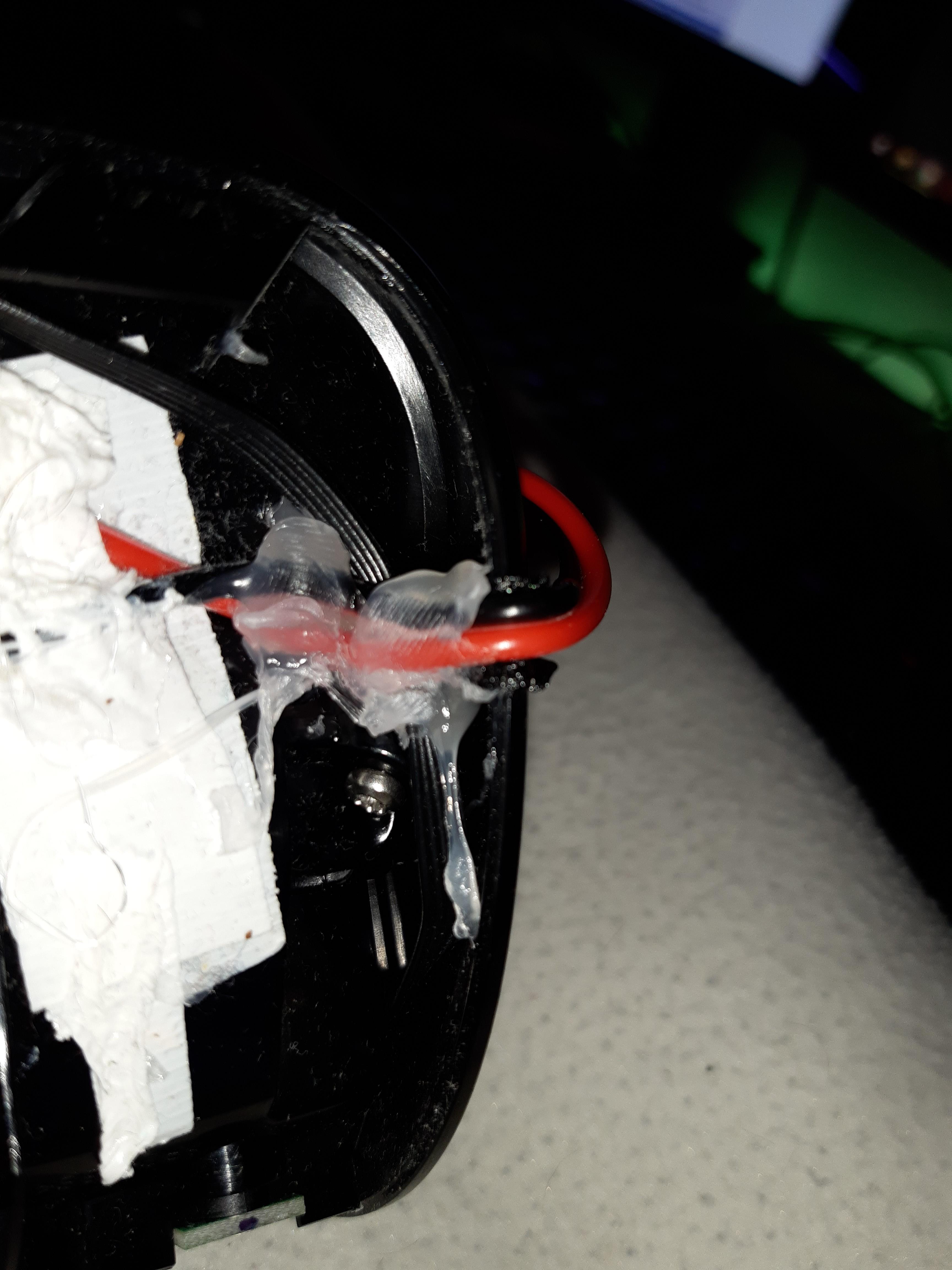 Ja, i know you guys already wondering about the foam - since there is now void where the Battery was sitting, i learned that this space will keon use to get louder. a little bit of Foam in this position will work wonders. I think my keon is now even quieter than before (living in a wg

There you go, never again need to charge 5-7hours for 1.5hours of cockhero

I really hope that my english wasnt too broken, for everybody to understand.

When u have any questions just reply or pm me. I will do my best to help.

Nice to see someone post a guide. I power modded mine about 6 months and it was the best decision for this product.

yea, the battery wasnt really doing it for me. i really would love some feedback for my howto. is everything understandable?

@hell1337 I hope that you don’t mind that I moved this thread to the How-to section. I thought that this guide shouldn’t get lost in the General section that has a constant in-flow of new threads. How-to only contains about 20+ threads. If you disagree I can move it back to General.

na i dont mind. actually i tryed to create in the howto section the thread, but i have no rights. iam pretty new in the community but i already fell in love - so i gave some love back. feedback appreciated

Yeah I think it is a good start. Some typos but that is understandable.

When I did my mod I was thinking of doing a similar mod with barrel connectors. I was however a little confused with the polarity of the barrels across different power supplies so I just literally soldered the cables from my power supply to the Keon. I’m not too familiar with electronics but here is a diagram of the different configurations of barrel connectors:

I’m assuming if people bought different power supplies then there would potentially be different polarity configurations. I’m not sure if this would impact the mod but I think it would be good to clear up any confusion around this if there are any.

oO i learned electrician in 2005 - but i never heard that the barrel connectors can have different polarity.

but with the “extension” cord i used and linked in the thread - there shouldnt even be an option to get it wrong, because the power modul has the right barrel adapter for the extension. iam sure you can find these items on amazon aswell. but i will do some research the next days whats up with the different polarity. when i find something out i will post in this thread

@hell1337 Great guide.
but…
Glue the voltage select switch on the power brick!!!
It moves way too easy
I almost killed my Keon because that sliding switch

I modded mine a few months ago too.

This is a great and comprehensive how to. There is very little information out there on keon modding - as far as I know this is the only guide of its kind on the internet.

I now feel far more confident in buying one. Thank you for putting this together!

Also, if you want to make it less likely that wrong polarity could kill your device, simply solder on a diode on positive phase internally. If you accidentally should connect the wrong adapter, the current won’t flow, and nothing should break.

Thanks for all the Feedback and suggestions.

What happens if you cut power to battery together and not separate and you see a spark when cutting it? I was reading how to do this on another site and I think I killed it because it doesn’t power on. Other post I followed wasn’t specific about that and I’m a total noob. I used a High Output Universal AC adapter where you can select from between 3V-24V and I select 15V, but nothing in between like yours. Also I have one of those little voltage detector pens and it’s reading voltage. Please help! 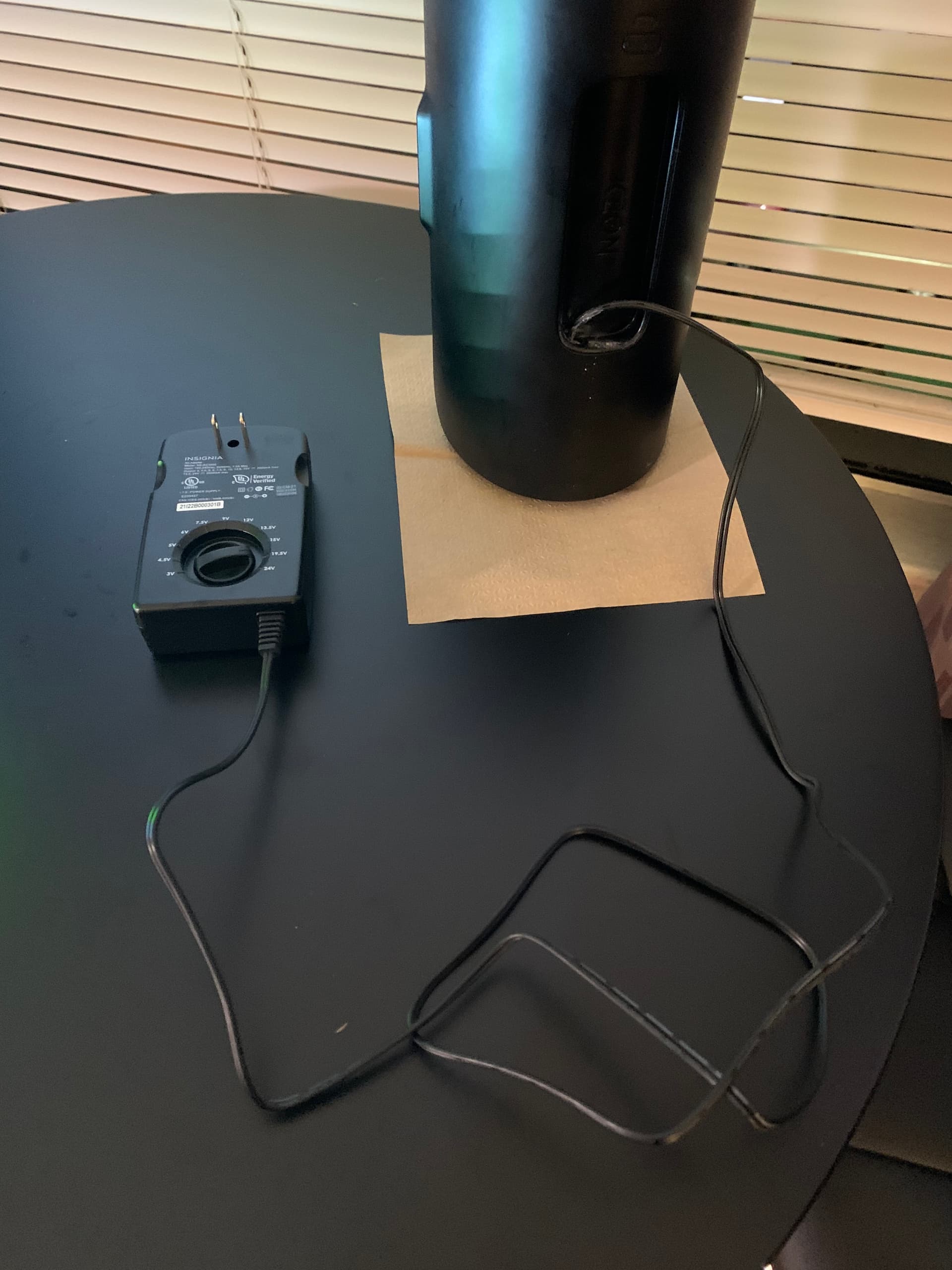 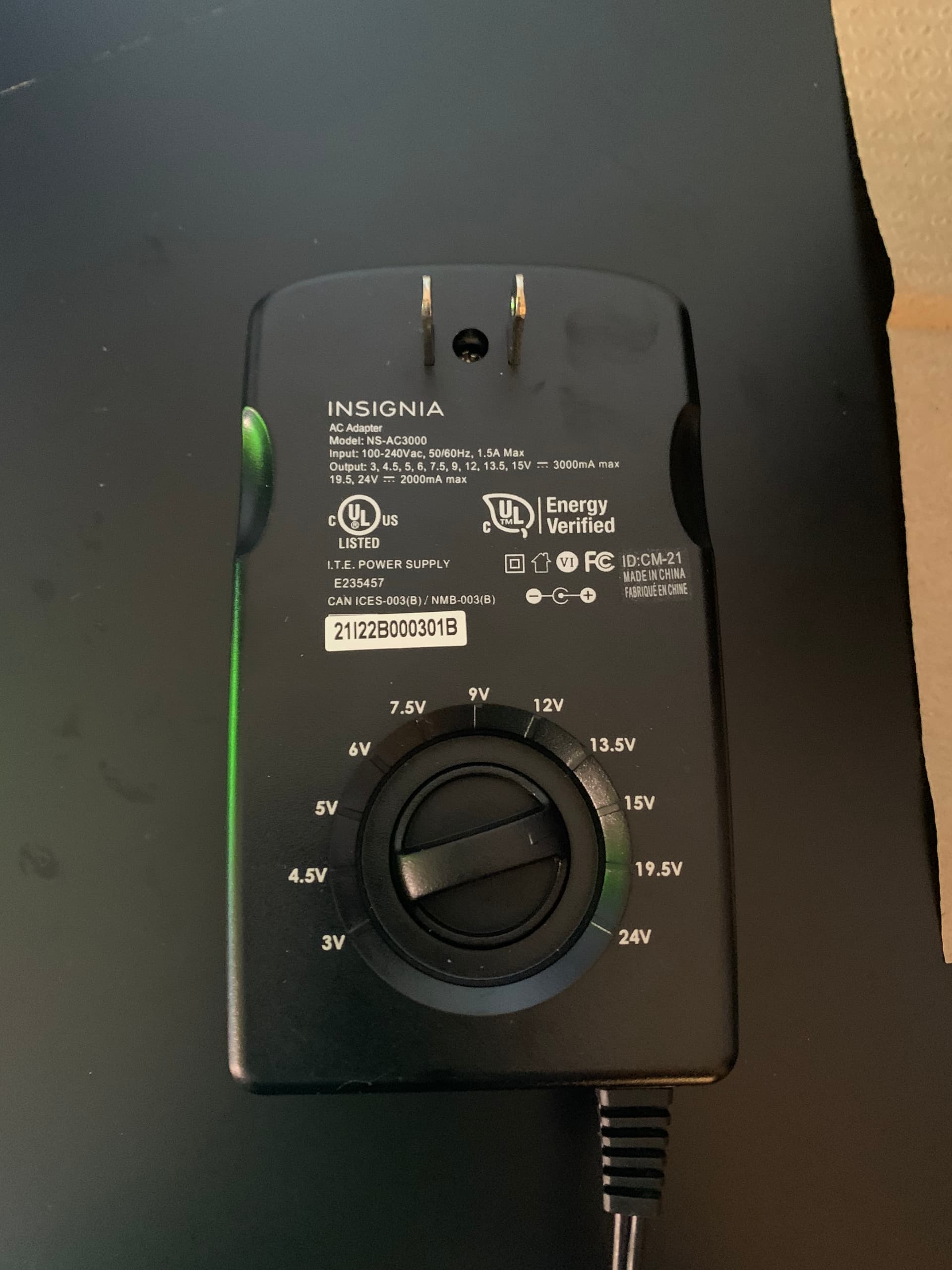 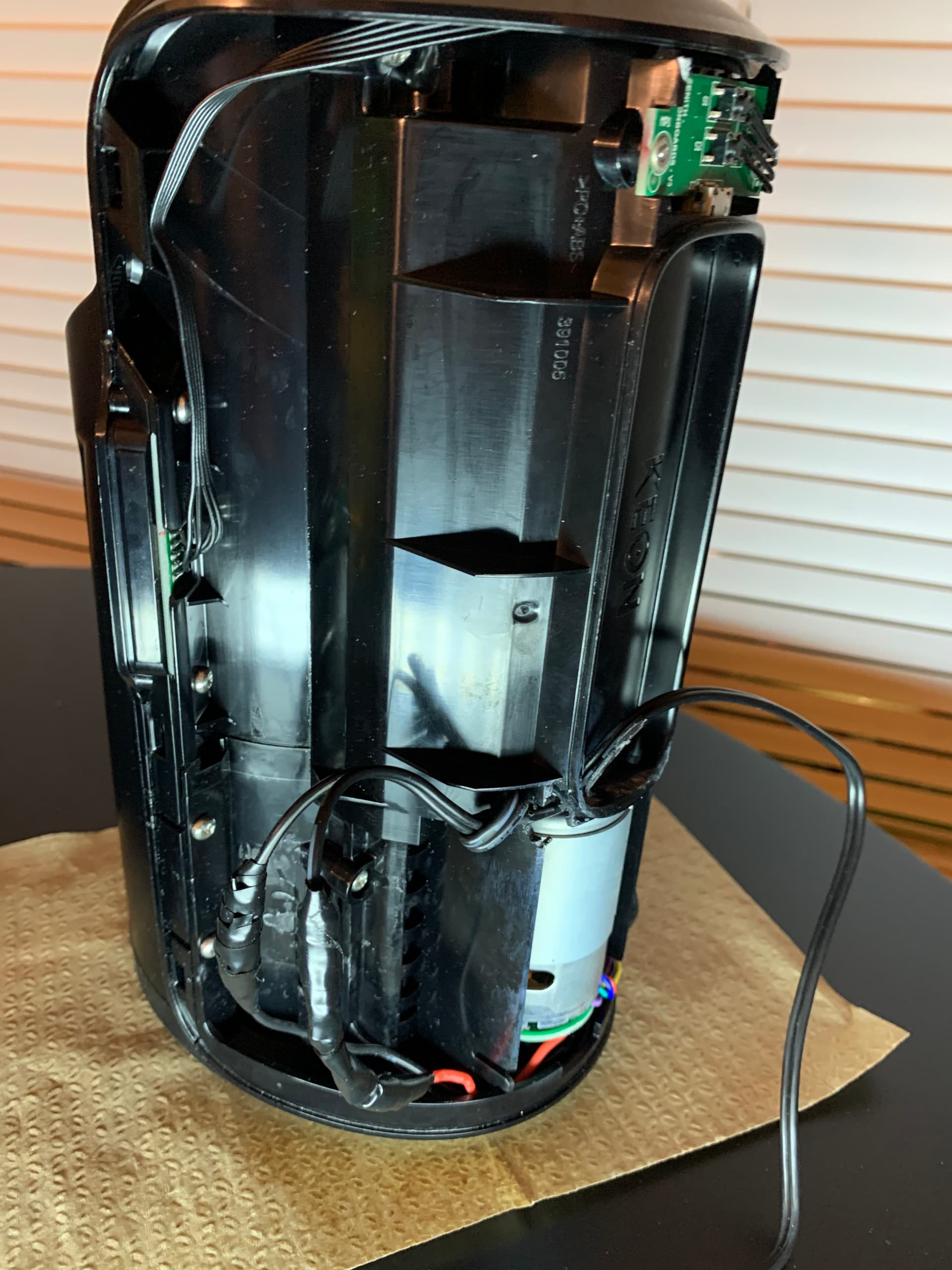 all the beta testers are premature i guess…

Hello, I still have further improvement but they are original mods from the manufacturer 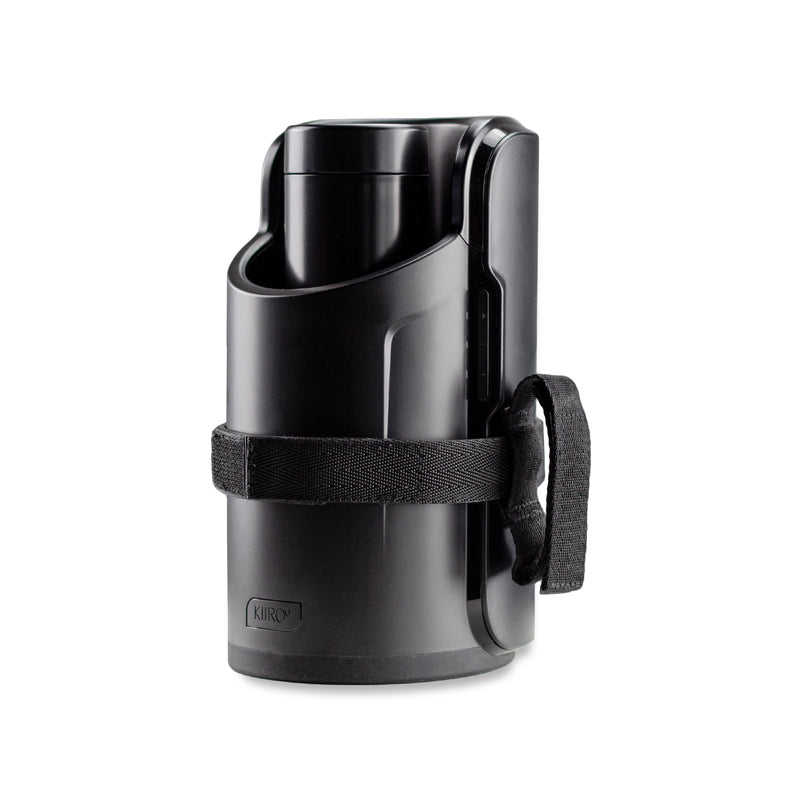 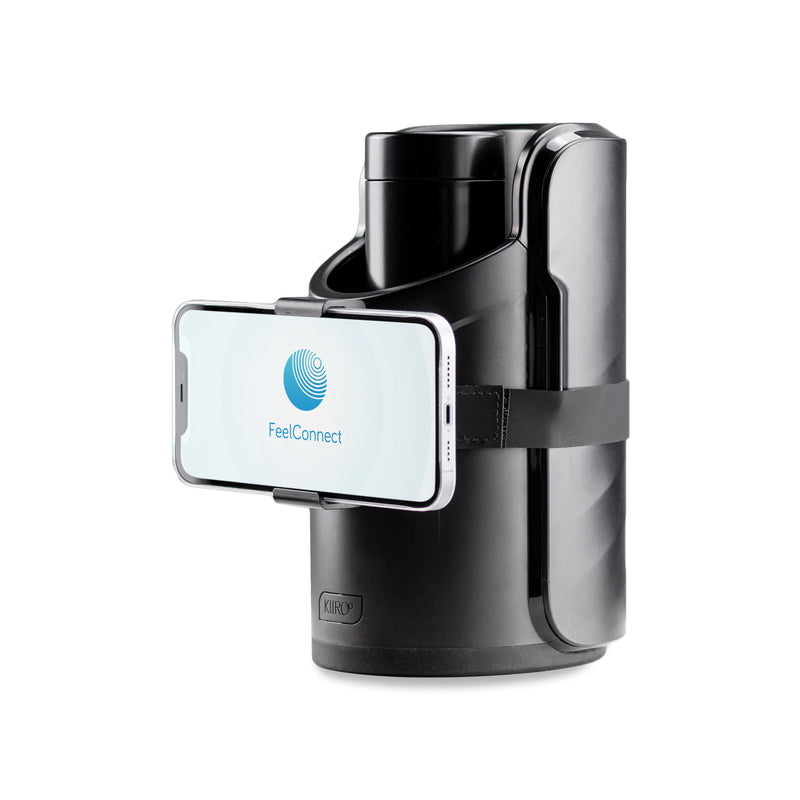 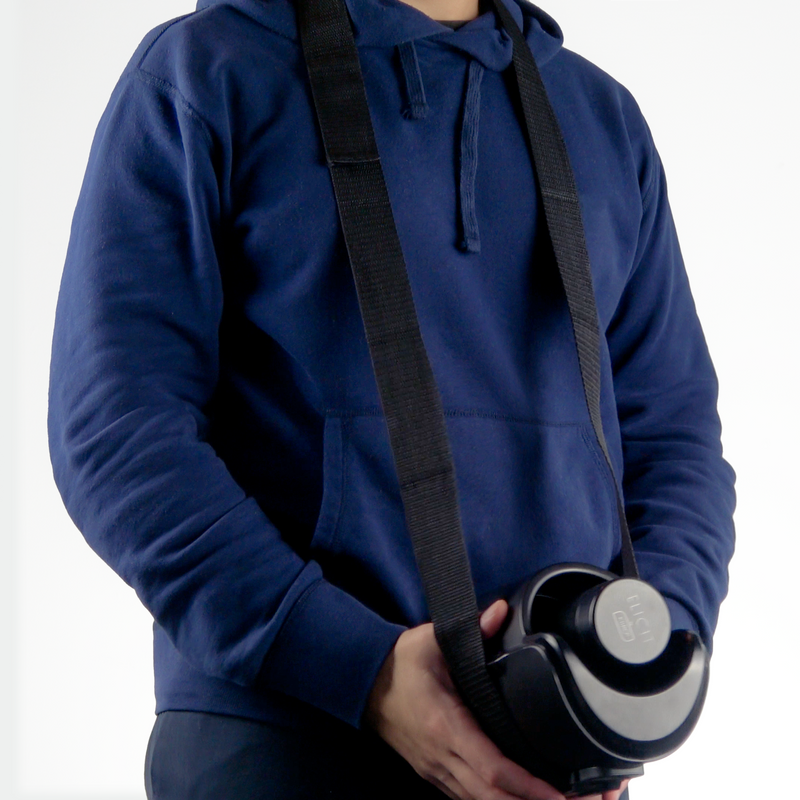 Tried sending you a message, but looks like you turned off your personal messages as it’s not an option. Can you please read my reply to your post and give me some advice, thanks!

bms is inside the battery pack, in the end with main power leads.

Cool must be real tiny. That means I could easily find another use for this battery.

I don’t like those flimsy barrel connectors so I used XT60.

One more benefit is I can switch between battery and external power easily if necessary.

i think we could do a little more, like just double the batters and set a regular battery charger, and a toggle switch that would let you go back to the battery, maybe double it I have 2 keons since the first broke they just sent a new one so I took the first apart, it was weird I guess I will call it a custom bolt or nut. we should be able to shorten the charge time as well I think I could design a better build of keon soo many bad qualities, and kiiro should sell just sleeves and not the whole stroker with the bad cap